All Things & The Main Things 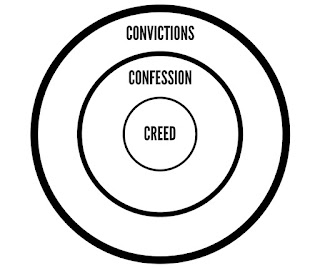 I believe lots of different things. As a pastor, as a Christian, and as a human being. I have beliefs about God, about Jesus, about how the church should work, about how to interpret certain parts of the Bible, about social issues, about politics, about sports and music. All sorts of things.

We use this diagram in our new members class to try to explain how we “order” these beliefs. It is not original to me, but I want to talk a little bit about it and about why I think awareness of this matters.

First, a brief word of explanation. In the center are those things that define Christianity. They are essential to being Christian - if you don't hold them, you are something else. We're calling them creed because many of these beliefs are covered by the early creeds of the church. Not that those creeds are magic, mind you, but they provide a consensus about what Scripture says that the historical church has always been united around. God is triune. Jesus Christ is God and a human being. His death and resurrection worked salvation for humanity. Things like that.

The next circle are those things that define certain Christian traditions. Not all Christians agree about them, but they cover issues Scripture does discuss and about which Christians have to make decisions. Who do we baptize? How do we structure the church? How, in general outline, does the Bible fit together? I call this circle confession in our membership material because the Westminster Confession and Catechisms are, for our tradition, the thing that sets out these beliefs.

Then the last circle, the biggest one, covers all the other things we might have convictions about as Christians. This includes lots of issues. How do we parent? How do we educate our kids? How do we vote? How do we understand debatable matters of culture? Should Christians drink? What sorts of movies and music is it healthy to regularly consume? And that list could go on.

Those debatable matters are still important – you have to make decisions about them. However, they also tend to require quite a bit of reasoning beyond Scripture. To make decisions about politics, for example, I have to make a bunch of judgments not just about the Bible but also about culture, about economics, about political theory and practical compromises. And so while we should have those convictions, we as a church do not require or teach them. In fact, diversity in those convictions is a good thing insofar as it causes us to discuss and debate in love with each other in a way that helps us all become wiser.

So that's the idea. Of course, some people love to raise questions, and I'll readily acknowledge that some things aren't clear cut. There are specific issues that exist at the boundaries of circles or even seem to cross them, and that's fine. Some parts of our confession are closer to the center than others. Certain cases that would otherwise be convictions bleed into the area where we as a church do need to address them. But generally speaking, I think something like this ordering of beliefs is really helpful for us as Christians to have.

With that said, let me offer a few specific applications I've been thinking about lately as I look at that chart.

First, all three circles matter. It is not the case that the further you move outward, things cease to be important. There are somein the modern church who want to think only about the creed circle and refuse to in any way address things outside of it. This is not the point of the chart, and frankly, it leads to an impoverished spirituality.

There are correct answers, in specific situations, to issues in all three of these circles. Scripture doesn't just talk about Jesus and the cross – it also discusses the sacraments and church structure and parenting and politics. If we had a perfect understanding of all things, we would be able to speak with equal confidence of the trinity and our opinions about debatable matters.

What changes as we move outward is two things: our certainty, and their necessity. I am less certain of my positions the further out I get, because humility requires that I acknowledge the many wise Christians who read the Bible differently. And they are less necessary – anyone who calls on the name of the Lord, who embraces the core things and believes them, is a Christian. Regardless of what they think about baptism or who they checked on their ballot. But necessary is not the same thing as important. There are only a few things necessary to be alive, but nobody would judge it much of a life if all I did was breath and sleep and consume calories.

So we should dig into issues in all three circles. We should discuss with other Christians what they think about doctrine and cultural issues. We should challenge each other. We should search the Scriptures and find as much wisdom as we can. Iron should sharpen iron – as we do this together, it helps us all become more biblical.

That said, at the same time, we need to maintain the center as central. It is a dangerous thing when we stop having the humility and charity to recognize where different beliefs belong. If some people want to ignore everything that isn't the creed, others want to take issues from all three circles and cram them into the center.

This comes from a well-meaning place. Many Christians have a sense that our age is increasingly relativistic and skeptical, and they believe they should stand for Truth. This isn't wrong. But one of the great enemies of truth is a folly and lack of humility about our own limitations.

Moving everything into the creed circle is dangerous for two reasons. One is that it can easily make us miss the most important things. I know plenty of church-going folk who believe deeply in their opinions on debatable matters but have given little attention to the gospel. I've met young people who can explain to me where in the tribulation they think the rapture falls but have never heard of basic gospel categories like justification or sanctification. You can only have a few “most important” beliefs, and the more you elevate those at the periphery, the more what really matters can be missed.

Even more, not ordering our beliefs is actually destructive to those beliefs at the core of Christianity. It can drive people away from them – if we demand that people share Christ and our politics, it means people otherwise interested in Christ won't give us a hearing. It can also undermine our faith in them. There are people who, when their convictions are challenged on any point, start to doubt the foundations of their faith. They have linked the two in a way that means that if they are wrong about anything, the whole edifice comes crashing down. This is a tragic way to live. It is far better to have the peace that, while my convictions and even my tradition might change as I study and wrestle with Scripture, my Lord remains the same.

There are two truths in all of that, two truths that we need to hold in tensions. We need to extend Christianity into everything – into every part of our lives. We need to always we testing all of our beliefs, listening to others and learning from them. But as we do, we also need to keep the main thing the main thing. We need to return, over and over, to the God that animates our faith, and we need to invite people, no matter where they are on the other stuff, to meet Him with us.
Labels: Bible Church Gospel