Job of Uz, After the Storm 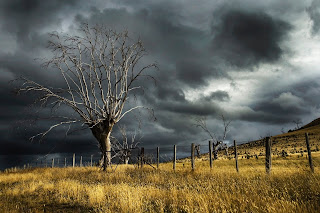 Job surveyed his fields
Thick with lambs and oxen.
His children skipped between them,
Dodging mudpies,
Singing tunes of praise.
Yet with the bounty intermingled
Ghosts of other sheep
And other children.

The Lord has given, Job thought,
But he has also taken away.

In life’s spring
We might be faithful.
A young man can keep his way pure.
Yet it is purity born
From an economy of oblation,
Somewhere between a handshake deal
And the good-natured arguments of friends.
Job was such a boy no more.

Purple clouds were swelling in the distance.
Job called his sons and daughters in to feast.
“God is good,” he told them
As they bowed around the laden table.
God is good.
He believed it,
But it was a goodness more alien
Than youthful piety could comprehend.

Outside the thunder stuttered syllables.
His sons dickered over veal,
Debating what was just and what was fair.
The lightning spoke a truer word.
Man does not argue with the whirlwind.
Our lot is necessary praises,
Creaturely humility,


And the consolation of friends.
Labels: Poetry