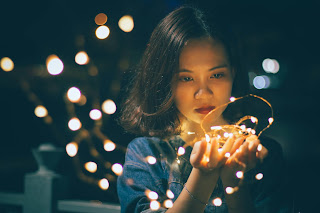 (This is the text of the reflection I offered on Christmas Eve for our church's service.)

Just speaking from myheart, this has been an especially hard year for me. Elizabeth died two months ago. Her birthday was last weekend, and now there’s Christmas and all the grief of the holidays that some of you are so familiar with. Plus all the other challenges of COVID and figuring out single parenting and just the craziness of life—I mean, in just the last few weeks we had the sewer back up into our basement and also, which I didn’t even tell people about because I was so tired of it all, I had to have a biopsy for a lump the doctor had found. It came back fine, don’t worry, but I honestly couldn’t even talk with folks about it because it was just one more thing on top of all these things… this has been a hard year, and a hard last few months, and frankly, even today and tomorrow are going to be hard for me. It is hard for me to think about celebrating.

Let me tell you the story of Jesus’s birth.

Once there was a teenaged girl in a very conservative society. She was engaged to be married. She got pregnant, and faced the condemning comments and judgmental stares. She told them she was a virgin and the baby was from God, but of course nobody believed that. It just made them think she was not only immoral but also a little crazy.

Just as she was about to give birth, this woman—Mary—and her now-husband, after a shotgun marriage, had to travel 90 miles on foot, walking for days while nine months pregnant, because the government decided to force everyone to leave their homes and jobs and travel to where they were born. In order to count them, so they could tax them more.

When this teenaged mother gave birth to Jesus, it was in the usual way. Bloody and with a lot of screaming. If you were with us last year we discussed how a lot of our images of the nativity aren’t quite right, how stables were a part of houses and they were probably staying with some of Joseph’s relatives, but it wasn’t their home. They were sleeping on the floor, without their neighbors or friends. A bunch of strangers showed up to celebrate the birth, sketchy types. And they didn’t have much money or honor or anything—Jesus was born not onto a soft bed but into a feed trough.

Shortly after that, the young family became refugees and fled to Egypt, walking hundreds more miles with the fear of death behind them, because the local tyrant had decided to commit genocide in order to try to kill their child.

This child Jesus, who presumably was called “bastard” more than once in his young years, grew up with all the usual hardships. Jesus’s world was a mess. When he was around six, there was a revolt and civil war in Israel where he lived that the government brutally put down. There are other wars and injustices. Plus the usual challenges of first-century life: disease and famine and hard labor. And there were personal tragedies. While we don’t know the details, it seems that at some point in his youth Jesus’s father Joseph died, so he faced that grief and the need to care for his mother.

He started his ministry, which he is famous for. During that ministry he wandered without a home, reliant on the charity of others. He faced constant attack and slander from the church leaders of his day. His family temporarily disowned him in embarrassment. On at least one occasion, a mob tried to murder him. And then one of his closest friends betrayed him, and he was condemned in a show trial and violently killed.

Here is what I know, on a day like today, after a year like 2020. That might not be the kind of story we like to hear or tell. It certainly isn’t what Hallmark puts on their advent cards—Elizabeth used to get mad at me because we’d get cards with nativity scenes in the mail and I’d make comments like, “Where is all the blood?” or “She doesn’t look like she just had a baby.” It doesn’t fit with the ways we make Christmas sound cheery or beautiful.

But that is the story we need.

Life is hard, and every two-bit god wants to offer you a way to escape the hardness. That is true of actual gods—Allah is just waiting for you in the afterlife; Buddha wants you to transcend all of this and stop caring. And it is true of our other idols. The corporate and political gods that promise salvation. Money, acceptance, the security of this world. They all promise to fix your life for you. They promise to distract you from the pain. We pay money and time and blood chasing gods that tell us that they can make things easier. We keep paying, even though they never do.

Jesus is the only God who doesn’t do that. At least, not primarily. Jesus is the only God who, instead of telling you life doesn’t have to be this hard, instead enters into the brutality of this world and bears it Himself beside you. He experiences it with you. The world’s gods, your favorite product or politician, mammon or human praise, whatever the idol is you look to for salvation… none of them do that.

Now yes, there’s more to the story. But here is where we need to start: when we talk about Jesus, we are talking about a king who chooses to suffer beside His subjects. A general who goes down in the trenches with his soldiers. And not just for an hour or two, slumming it with the commoners. He lives his whole live in those trenches. He aches and weeps and bleeds just like you and just like me.

Listen to how the prophet Isaiah describes Jesus:

"For he grew up before him like a young plant,
and like a root out of dry ground;
he had no form or majesty that we should look at him,
and no beauty that we should desire him.
He was despised and rejected by men,
a man of sorrows and acquainted with grief;
and as one from whom men hide their faces
he was despised, and we esteemed him not.
Surely he has borne our griefs
and carried our sorrows;
yet we esteemed him stricken,
smitten by God, and afflicted.
But he was pierced for our transgressions;
he was crushed for our iniquities;
upon him was the chastisement that brought us peace,
and with his wounds we are healed.
All we like sheep have gone astray;
we have turned—every one—to his own way;
and the Lord has laid on him
the iniquity of us all.
He was oppressed, and he was afflicted,
yet he opened not his mouth;
like a lamb that is led to the slaughter,
and like a sheep that before its shearers is silent,
so he opened not his mouth.
By oppression and judgment he was taken away;
and as for his generation, who considered
that he was cut off out of the land of the living,
stricken for the transgression of my people?
And they made his grave with the wicked
and with a rich man in his death,
although he had done no violence,
and there was no deceit in his mouth." (Isaiah 53:2-9)

That is our God. And that is what Christmas is about. Jesus didn’t have to, but he chose in love to join us in our humanity, in the hardness and sadness and brokenness of it. Sure, there are details of your story that are different from his. He was a Jewish man in first-century Galilee; you have your own specific heartbreaks and history. But God has suffered in this story, suffered deeply.

When God looks at you, it isn’t like some rich one-percenter looks at a poor person on their TV screen. God looks at you the way people look at each other in support groups or 12-step programs: that look that says, “I might not know you, but I know. I get it, man.” If God had human eyes, you could see the empathy in them, and the tears. 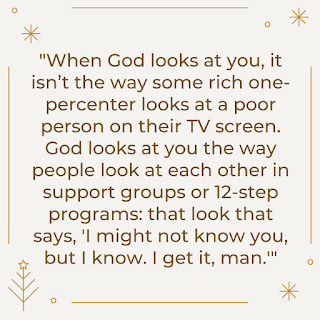 Yes, there is more to the story. Jesus doesn’t just suffer as one of us; He also suffers for us and works our salvation. He suffers for the world, and when He rises in triumph over that suffering, it is the foretaste of the world’s resurrection, of bodies given new life and creation washed clean and every tear dried and all things made new. There is profound, unimaginable hope in the Christian story.

But some days, especially in hard times like these, we can struggle to feel that hope. And that is okay. Because even if your heart isn’t there tonight, this is what I want you to hear: Jesus has been here too. He has been here too.

I remember, ten years ago, celebrating Christmas at a hospital. Rebekah, our oldest daughter, had been born a few weeks before. She was still teetering on the brink of life with significant health challenges; there were still moments where her heart would stop and we would have to shake her back to life.

I remember, that day, standing in the foyer of the catholic children’s hospital where she lived and looking for a long time at this nativity scene, Joseph with his arm around Mary, looking down at their little child. And then I went up to our room and looked down at our tiny, struggling girl, and Elizabeth stood next to me, and I put my arm around her. I remember in that moment just reflecting on this fact: these are, in a sense, the same scene. There we were, with all the beauty and fear of childbirth and humanity and mortality. There was Jesus, in the same place. God was there in that nativity, and He was here with us. The same God, who has walked the same road.

After a year like this one, that is all I can offer from my heart this Christmas. God was there, and God is here. The same God, who has walked the same road.

I pray you find in that a beauty to sustain you, even if the rest of the hope feels too hard to believe.