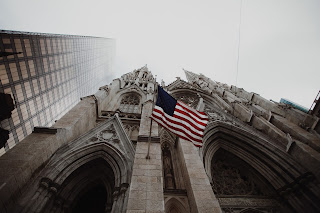 For a long time, there has been heated online debate about Christian Nationalism. Whether from folks on the left decrying it or folks on the right applauding it (or others on both sides with more complicated views), it continues to consume a lot of oxygen. I’ve avoided writing about it for several reasons. One: it is a notoriously slippery term; depending on who is defining it and in what context, it seems to mean everything from “I love Jesus and have appropriate patriotism for my country” to “I oppose (or support) a violently-imposed white theocratic ethnostate.” Two: while I follow politics, I as a pastor mostly avoid political debates. I have a job with a boss who is on a throne that has no connection to Washington, D.C. This is doubly true for debates I see as largely being online; my congregation is physical and local, not digital and vocal. And three: given the state of our cultural moment, I think the discussion is theoretical to the point of being silly. It reminds me of someone realizing no one around them speaks English and so responding by yelling in English even louder in the hopes it will change the status quo. A bit more on that below.

That said, I’ve had several congregants ask me about the Christian nationalism debate in different ways, so I wanted to jot down a couple of notes here that I think are important to how Christians engage with this question since it seems to be one I can’t fully escape.

As mentioned, one of the difficulties in any debate about a term like Christian nationalism is definition. People who both oppose and support it vary on what it actually means. Indeed, such a lack of clarity is advantageous to both sides. Its detractors want it to be so broad as to encompass basically anyone who is either on the political right or who supports the lordship of Christ beyond the personal and private spheres of life. Its supporters want to use it to demand specific (sometimes extreme) reforms while also applying it to causes and candidates that have little to do with historic Christianity. So in what follows, I’m not going to offer one single definition. Instead, I’m going to speak to what I see as trends and currents in the conversation.

That said, let me give one thing I agree with that I think draws some people to Christian nationalism, and then note several biblical and cultural concerns with its ideas.

The point of agreement is that we as Christians should be engaged with every sphere of life, including our political and communal life, and that we should advocate the common good in a way shaped by our faith in those shared spaces. Christianity can never function as a purely private religion. It makes claims about the universe, justice and truth, the nature of humanity and our destiny, all of which inevitably move beyond private opinions.

Those who object to Christian nationalism often end up objecting to Christian political involvement writ large, and that isn’t a helpful way forward. Christianity has always had political implications for believers, from the early church advocating for protections for the oppressed and rejecting Caesar worship to 19th-century abolitionists to 21st-century discussions about bioethics and sexuality. Christians can debate the specifics of what such political action should entail, and they very much do, but virtually every American Christian tradition from liberal Catholics and mainline protestants to the black church to conservative evangelicalism and Catholic integralism ends up speaking to politics. It is unavoidable.

What’s more, I’m sympathetic to the argument that as Christianity has influence, it should shape the culture. If it reflects the truth of the universe, it says things that are universally good. What’s more, Christianity has shaped the culture in many ways we don’t fully appreciate. The whole idea of universal human rights and many other modern political values have deeply Christian roots. Inasmuch as that influence is waning, it makes sense that Christians should feel sorrow. We should hope for the church to be a light on a hill even to the nations as nations, showing them a better way to conduct their life as people created by God.

That said, I also have several major concerns with the ideas caught up on Christian nationalism, and that is where I want to spend the rest of this piece.

First of all, while I’m not going to spend much time here, believers attracted to the ideas and thinkers in the Christian nationalism movement should be very open-eyed about the deeply troubling racial aspects at play in some of its thinkers. I don’t want this to be the focus of the critique, since I think plenty of people are drawn to the discussion while bearing no ill will toward non-white brothers and sisters. However, there is a real overlap between some of the ideas floating around in Christian nationalist literature and the views of Christian segregationists and kinists. At the very least, it is noteworthy that plenty of its advocates, while insisting they aren’t racist, toe lines that they should instead flee from in revulsion and have very mixed histories speaking to issues like slavery and interracial marriage. On that front, I’d just say let the reader beware.

More substantially, I have two big concerns with the discussion. The first is theological: I think that Christian nationalism often moves the hope of Christ’s kingdom from the sphere of the church to the sphere of the state. It sees God’s work of redemption as ultimately being about nations becoming Christian; individual conversion and the church’s community and mission often end up being secondary, only mattering inasmuch as they help disciple states into submission to Christ. What’s more, as a corollary of this, in Christian nationalism our national, ethnic, and family identities often end up being more defining than our identity as the church; Christian identity simply trains us for faithfulness in these other spheres.

Those ideas just don’t fit with the story Scripture tells. The church is the kingdom of God, the people of God, the ethnos and nation over which Jesus rules (1 Peter 2:9). It is a trans-national body that ultimately becomes the New Jerusalem whose unveiling marks the transition to the age to come (Revelation 21:1-4; note that the city is “the bride,” meaning the church of God). Yes, we still keep our other identities as human beings. However, those things are subordinated to and relativized by our new identity in Christ. We are “sojourners and exiles” (1 Peter 2:11). There is no longer Jew, Greek, Barbarian, or Scythian (Galatians 3:28, Colossians 3:11).  We belong to the family of Jesus before any earthly family. (Luke 14:26) Much Christian nationalist thought either implicitly or explicitly rejects these clear biblical truths.

This confusion isn’t just theologically problematic; like all bad theology, it flows into some major practical issues. It means that our sense of hope for the kingdom of God ends up tied to the current state of our nation. We measure the mission of God not by the gospel going to the world but rather by the Christian identification (or lack thereof) within our country. This leads to enormous discouragement because it means rather than believing we have all things in Christ and placing our hope in his kingdom which is still to come, we end up thinking the full Christian reality can be realized in this age and is not realized as such until our nation is “Christian”, neither of which are promised by God.

What’s more, chasing such hope for this age leads to both compromise and neglect for the mission of God. It creates an enormous temptation to compromise truth or justice in order to gain power; Christianity has a long history of such compromises, and they are always corrosive to the cause of the gospel. That isn’t to say Christians shouldn’t use what power they have for the common good, but it must always be done within the context of restful hope that God’s kingdom is not of this world and it is where our true inheritance lies. And such focus on political influence can easily lead us to pursue it rather than to pursue the serving, proclaiming, self-giving mission of God. While I don’t want to dismiss all of the culture wars—there are battles worth fighting in the name of justice, truth, and love—I often worry that they lead Christians to exchange the struggle for souls to become disciples for the struggle for partisans to become office-holders. Which is a sad exchange indeed.

In addition to that theological concern, my second issue is one of practicality. Every Christian ethical discussion must ask not simply “what should we do” in the abstract but “what should we do in this moment?” Knowing the time is an essential part of Christian moral judgment, and the whole Christian nationalism discussion seems deeply misguided on these questions of history and the present.

This is true in two senses. One is that I think many people sympathetic to Christian nationalism misunderstand our relationship with the past. They romanticize some past moment in America’s history, either the founding or perhaps the first half of the 20th century, as a golden age to which we must return. There are numerous problems with such restorationist ambitions, not least that they tend to oversimplify history itself. However, my bigger concern with all such enterprises is simply this: the world we live in today is a result of the world we lived in then. The 1940s and ‘50s gave rise to the 1960s and ‘70s; little would be gained if we simply set the clock back, as the cultural forces in play then would still be the same.

More importantly, I think Christian nationalism vastly misunderstands the present. It wants to act as if American culture could suddenly and easily be restored to a place of religious devotion and biblically-informed morality. That if we just got the right leader, the advances of secularism and self-expressive individualism would vanish like the mist. That seems preposterous.

Certainly, God can move to bring renewal and revival. Maybe he will, or maybe this is a season for the church to instead face chastisement and learn from proper divine discipline. Regardless, unless and until there is such a radical spiritual change in America, attempts to make sweeping political changes informed by Christianity are doomed to fail.

What’s more, it may well accelerate the culture’s shifts in precisely the opposite direction. The narratives that change cultures always need both a hero and a villain, and Christians trying to take up the sword and kowtow to Rome to stem the tides of secularism is exactly the sort of villain that serves that cause. Even if such a narrative comes from our cultural despisers, we would do well not to be the patsy for the stories they tell.

So all of that said, what is the alternative? Well, I’m not writing the above to suggest instead some holistic Christian political theory myself. I have some thoughts, but this piece really isn’t the place for them. One can note a position’s errors without having a holistic alternative to defend. But what I would offer for Christians processing these political debates are four specific, personal exhortations I think fit both Scripture and the moment well. They aren’t revolutionary, but they are critical.