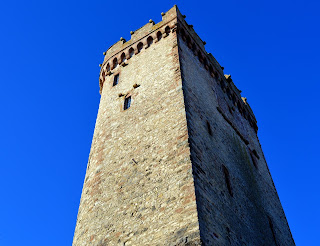 We cannot separate our understanding of a thing from its purpose. Take the picture below – a curious implement to be sure, especially if I tell you it dates back to ancient Rome. We might be impressed by the craftsmanship and the age, but without knowing what it is for we don't know what to make of it. If I told you it was meant for plotting navigation routes for ships, we might feel one way. If I told you it was a surgical instrument used in childbirth (which it is), I suspect many of us would view it very differently. 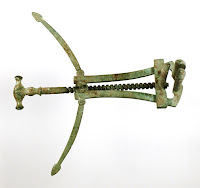 As Christians, we are speaking a language defined by the past, especially by the Old Testament. While things have changed with the coming of Jesus, there is a continuing theological vocabulary we share with ancient Israel. Christians don't pay as much conscious attention to this continuity as we perhaps should – there is a tendency by many to fail to appreciate the deep Jewish roots of Jesus and the early church. At the same time, certain unconscious ideas about the Old Testament still affect how we understand our place in the world as New Testament believers.

Here is the specific issue I'm thinking about this morning: what is the purpose of the people of God in the Old Testament? What are they for? I suspect the answer many would give is that their purpose is to be pure. The goal of Israel is to be this nation apart, a holy nation that God loves while the world around it throbs in the throes of paganism. Often, this image serves as a foundation for viewing the church in the same way. We think our purpose rests in our set-apartness, creating communities doing their best to stay pure while they hunker down and wait for Jesus to return.

What if that idea about Israel's purpose is wrong?

I want to be very careful here, and I hope you'll read this carefully. I am not about to suggest that purity isn't of central importance for the Old Testament (or New Testament) people of God. We are called to be holy and set apart. Purity is important, but it was not Israel's purpose – rather, it was the means to their true end. Losing sight of that end leads us to a stunted and misunderstood picture of the Old Testament, and as a consequence, of our place in the world as the church.

Israel is for the Nations
Start at the beginning of Israel's story. When God calls Abram in Genesis 12, he calls him to separation from his family and father's house. He promises, in this separation, a divine blessing. However, both of these promises find their purpose beyond Abram and his descendants. “And I will make of you a great nation, and I will bless you and make your name great, so that you will be a blessing. I will bless those who bless you, and him who dishonors you I will curse, and in you all the families of the earth shall be blessed.” (Genesis 12:2-3) God calls and blesses Abram so that the blessing might flow outward to all the families of the earth. This same promise is repeated to Isaac and Jacob: “in your offspring all the nations of the earth shall be blessed.” (Genesis 26:4, 28:14)


When God rescues Israel out of slavery in Egypt, the same themes get repeated. God works Israel's deliverance, in part, so that “the Egyptians shall know that I am the LORD.” (Exodus 14:18) Notice – that is about God's desire to be known by Egypt, not just Israel. Indeed, when Israel goes out, in addition to the Hebrew slaves “a mixed multitude also went up with them.” (Exodus 12:38) Egyptians and other Gentiles joined in the Exodus, and it is no surprise that immediately after learning this we see the Passover being given not just for Israel but also for foreigners. “If a stranger shall sojourn with you and would keep the Passover to the LORD, let all his males be circumcised. Then he may come near and keep it; he shall be as a native of the land. But no uncircumcised person shall eat of it. There shall be one law for the native and for the stranger who sojourns among you.” (Exodus 12:48-49) Israel is, at its inception, not a fortress but a metropolis with gates meant to welcome foreigners in.

When Israel receives the law, it certainly comes with a call to be pure and seek to follow God's ways. Parts of the law were designed to ceremonially set Israel apart from the surrounding nations. Yet even this comes with a sense of missionary activity. Moses, in explaining why Israel must follow God's commands, says it like this: “Keep them and do them, for that will be your wisdom and your understanding in the sight of the peoples, who, when they hear all these statutes, will say, ‘Surely this great nation is a wise and understanding people.’” (Deuteronomy 4:6) Indeed, he goes on to say, this should cause the nations to wonder at the goodness of Israel's God. The Ten Commandments and the rest of the law are for Israel, but also in a different sense for the nations watching Israel seek to keep them.

Israel's monarchy is also meant to serve as a witness to the nations and to call them to the Lord. When Solomon stands as Israel's king and prays, it isn't just for Israel: “Likewise, when a foreigner, who is not of your people Israel, comes from a far country for the sake of your great name and your mighty hand and your outstretched arm, when he comes and prays toward this house, hear from heaven your dwelling place and do according to all for which the foreigner calls to you, in order that all the peoples of the earth may know your name and fear you, as do your people Israel, and that they may know that this house that I have built is called by your name. (2 Chronicles 6:32–33)

The prophets drip with such a sense of Israel's purpose in reaching the nations. It is God's aim in the world: “For from the rising of the sun to its setting my name will be great among the nations, and in every place incense will be offered to my name, and a pure offering. For my name will be great among the nations, says the LORD of hosts.” (Malachi 1:11) Israel's failures of obedience are condemned because they cause God's name to be “profaned among the nations.” (Ezekiel 36:23) It is also the reason for God's works in continuing to save them:
The LORD has made known his salvation;
he has revealed his righteousness in the sight of the nations.
He has remembered his steadfast love and faithfulness
to the house of Israel.
All the ends of the earth have seen
the salvation of our God. (Psalm 98:2–3)

Ultimately, this missionary purpose finds its fulfillment in the Messiah. Anticipating that coming, perfect king, Isaiah says that “in that day the root of Jesse, who shall stand as a signal for the peoples—of him shall the nations inquire, and his resting place shall be glorious.” (Isaiah 11:10) Indeed, God declares that “It is too light a thing that you should be my servant to raise up the tribes of Jacob and to bring back the preserved of Israel; I will make you as a light for the nations, that my salvation may reach to the end of the earth.” (Isaiah 49:6)

Purity & Purpose
It's probably important to repeat my earlier clarification – I am not arguing in any of the above verses that the integrity and purity of God's people are unimportant. They are crucial to carrying out our task, and the failure to safeguard and pursue them is given by the prophets as one of the reasons Israel fails to keep this mission. It is by being a people who are in one sense set apart that the nations can be drawn in.

However, Biblical purity finds its proper place within the context of our mission to love and show God to the world. Many of Jesus's disputes with the Pharisees sound strikingly like debates about this purpose. After the failures of the exile and subsequent imperial oppression, the Pharisees endorsed a vision of purity that was actively hostile to reaching the Gentiles. It was holiness through withdrawal, and Jesus's counter-argument was often some form of “you're missing the point.” “Woe to you, scribes and Pharisees, hypocrites! For you tithe mint and dill and cumin, and have neglected the weightier matters of the law: justice and mercy and faithfulness. These you ought to have done, without neglecting the others.” (Matthew 23:23)

So there is an important way to pursue moral purity, but also a destructive one. How do we tell the difference? The answer rests in the posture of our hearts towards those outside our fellowships. Do we understand ourselves as existing for them, or do we instead attack them as threats to our moral stability? Are the stories we tell ones highlighting how much they matter to God or about how much better than them we are? Is our posture in obedience one that seeks to glorify God among the nations or one that seeks to glorify ourselves?

These might seem subtle differences, and they must remain so. To err too far in the other direction, to pit purpose against purity in a way that dismisses the latter as unimportant, is just as destructive. It is no solution to the problem of hiding our lights under baskets to therefore extinguish them entirely. What we are aiming for is a shift in direction, not a wholesale abandonment of the pursuit of holiness.

However, the outworkings of these subtle differences are enormous. It is the difference between being a welcoming home and a whitewashed sepulcher; between using God's law as a scalpel for surgery and a weapon for stabbing outsiders in the neck. There is a fundamentally different character, one of humility and love, that comes when we recognize that our purpose is to show God's goodness to the world. Everything changes when we realize that the apex of our holiness as Christians is to serve as the aroma of Christ, a perfume meant to be smelled by those around us, a scent strange but also strangely attractive.

To put it at its simplest – the question we have to ask is whether we are pursuing moral purity in a context of loathing or of love. In the former, we create a box, a castle with unassailable walls behind which holiness withers and twists into something wrong. It is within the context of love that it instead becomes the sort of unsettling, transformative power we see at work in Jesus.