The Death of Death, Part 1: We're All Gonna Die 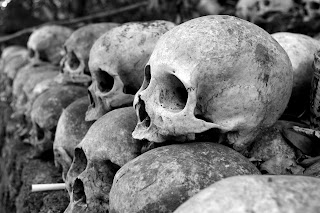 The other day, meeting with our oncologist to discuss the next stage of my wife's cancer treatment, we had an interchange with our nurse that is still niggling at the back of my skull. I don't remember what Elizabeth said, but it contained an acknowledgment of her mortality. What I remember was the response. The nurse's spine stiffened and she replied, "I wouldn't say that. Around here we believe nobody has an expiration date."

I'm sure she was just trying to keep our spirits up. Despair is a danger when dealing with a terminal diagnosis. That said, the statement was so patently false that I wanted to shake her and say, "What are you talking about? Of course we do! Humanity has a 100% mortality rate. Every one of us presses out of the womb sealed already in the certainty that, assuming Christ tarries, to dust we will return."

I didn't say any of that, but it has continued to bother me because it reflects something about our world.

We do have expiration dates. We don't know them, but that doesn't mean they aren't there. Death is, Gerard Manley Hopkins says, "the blight man was born for." Or to use the words of the Psalmist, "What man can live and never see death? Who can deliver his soul from the power of the grave?" (Ps. 89:48) To be human in this age is to be mortal.

If anyone should be open-eyed about that fact, it is the men and women bustling about this cancer treatment center. They are pumping poison into people whose bodies are slowly devouring them from within in the hopes of buying a few more years with drugs that will hopefully kill the tumors a little faster than they kill the patient. Pretending like death is anything but inevitable in such an environment must take a monumental work of cognitive dissonance.

Such dissonance is hardly the fault of this one nurse. She has been taught it by our world. We almost never take the time to stare directly at the grave. One of the easiest ways to recognize the depths of our denial is to compare it to the past. Fifty years ago, schoolchildren were memorizing poems like "Thanatopsis" and "Death Be Not Proud." An elderly saint recently quoted a great stretch of the former to me from memory as she reflected on her coming demise, and I realized that she had a readiness to take her "chamber in the silent halls" her children and grandchildren didn't share. Earlier still, there was a whole genre of books on the ars moriendi (the "art of dying well"). In contrast, we live in a world shot through with denial. Our instinct is to medicate and ostracize someone who makes the simple, essential observation that all of us are going to die.

Of course, mortality is not so easily ignored. Most of us, despite our rehearsed repudiations, sense deep down that we are mortal. Age, if nothing else, is a schoolmaster intent on teaching us this unavoidable lesson. Our response is largely to distract ourselves from the reality of it. Take the violence of much of our entertainment. We revel in act of taking life, in the loss of life, because it is filtered through a medium that removes its terrible essence. Dying becomes a few poetic final lines and a swell of sad music. Grief, if acknowledged at all, is usually a problem solved by the end of the episode. We feast on death stripped of its reality and monotony and finality; a pleasant fiction to keep us from confronting the hard truth.

If all of this unsettles you, if you are hungry for the "but" to remove the weight of the grave, that is understandable. Christianity does offer immense comfort in the face of our mortality. I'm going to write a second post next week that deals with that hope. However, we shouldn't use hope as a dodge. It can only be found after we thoroughly appreciate our condition. We need to internalize the reality of death before we can rightly hear the hope of resurrection.

Each of us will, sooner than feels right, suck in our last breaths. Our hearts will stop, our neurons will cease firing, and our presence will turn into an unavoidable absence. We are here, and then we will be gone, and those left behind will be able to find us no more.

No system of values, no way of living, will ultimately survive if it relies on denying this reality. We can remain distracted for a while, comfortable and entertained, but it will only leave us less prepared when the reaper's approach becomes undeniable. We need something stronger than death to answer it, because it is far stronger than you or me.

Next week, in part 2 of this series, we will discuss what answer Christianity gives. Hint: Christians don't always do a good job of understanding or living into it.
Labels: Death