A Country Above All Earthly Powers 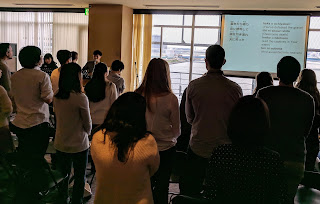 Elizabeth and I have had the joy, this last week, of visiting several friends in Tokyo, Japan. Yesterday, as a part of that trip, we got to do one of my favorite things in the world: we were able to worship at a bilingual church in Tokyo with a large group of brothers and sisters in Christ. It was, as always, a beautiful thing to sing hymns in the native tongue of those fellow Christians and reflect on the international, multilingual kingdom of heaven to which we all belong.

There are many truths such times of worship cause me to reflect on. For instance, it is an instantiation of the reality of the church we all occupy. Christianity is a deeply international religion - the West's colonialist picture of it being white and Western European is a thing of the past. There are far more believers in each of Latin America, Africa, and Asia than there are in North America. Our experience at this church on Tokyo Bay was especially indicative of this - as a multilingual gathering in downtown Tokyo, I met believers from Zimbabwe, Australia, and Korea as well as many from Japan.

What's more, these Christians are at the heart of how Jesus spreads His gospel. The kingdom has always advanced through indigenous churches discovering the hope of Jesus, being empowered by the ordinary graces of Word, sacrament, and fellowship, and then seeing spiritual multiplication. This is not the post where I will explore those ideas, but they are all essential to how we think about the church in the world.

It is also powerful to see the ways Christianity meets people in vastly different cultural contexts. I was struck, sitting under the preaching of Seima Aoyagi, by how familiar texts take on different flavors in different places. They had been preaching through the gospel of John. As he described the conflict between Jesus's revelation of God and the Pharisees' insistence on the traditions of their forefathers, I was struck by the fact that this story was really for these Japanese believers, facing the intense claims of family and history, in a way it wasn't for me as an individualistic American. The freedom of the gospel, as he spoke of it, was likewise both the same one I cling to but also proclaimed with a certain color that highlighted the freedoms from a certain Japanese sort of shame and guilt I am not used to feeling in my own heart.

Most of all, though, the thing Elizabeth and I found ourselves talking about was how seeing ourselves as a part of this international body is transformative to how we understand our place in the world. One of the central ideas of Christianity is that all of our markers of identity - our family, our city, and our country - are relativized by new identities in the family and kingdom of God. We cannot give them the allegiance they would otherwise demand because we have a higher allegiance.

Consider this: I sat under a Japanese fellow-minister as he declared Scripture to me. In that act, he had a deeper authority over me than anything claimed by my earthly citizenship. No Presidential decree or act of Congress could overrule what he proclaimed from Scripture. After that, I came to the Lord's table with brothers and sisters from around the world. In that act, I professed my union with them, a union deeper than any earthly identification. Water and blood might battle for allegiance in this age, but in Christ, bread and wine are thicker than either. I am just as obliged to care for and look out for this Japanese woman and this Zimbabwean foreign exchange student than someone who shares my nationality or biology. In some ways, I owe them more care and love.

Of course, this higher citizenship does not obliterate our earthly markers of identity. The odd thing about being citizens of God's kingdom is that it should make us both better and worse citizens of the kingdoms of this earth at the same time.

Yet at the same time, we should never buy in. When our nation commits injustices, we should be quick to point them out (in both directions) because we are bound by a higher standard of justice. When politicos and talking heads try to make us afraid, we should shrug and smile, knowing that our God is far more terrifying and good than they could imagine. When family or state try to guilt or manipulate us into compliance, we should walk confidently into rejection and disempowerment. After all, the God whose name is on our Country will endure long after they are dust and memories.

Each Sunday, as we gather with the saints, we proclaim this truth. We are stepping out of our worldly rhythms and embodying a foretaste of that coming country. God is our King at that moment. People of every tribe and tongue kneel before Him as kin. As we are joined to Christ, so we are joined to each other. As we partake of one cup and loaf, so we are one. As we pray, a jumble of languages, God not only hears them all but weaves them together in a tapestry of power. We are a people joined in this reality:

"These all died in faith, not having received the things promised, but having seen them and greeted them from afar, and having acknowledged that they were strangers and exiles on the earth. For people who speak thus make it clear that they are seeking a homeland. If they had been thinking of that land from which they had gone out, they would have had opportunity to return. But as it is, they desire a better country, that is, a heavenly one. Therefore God is not ashamed to be called their God, for he has prepared for them a city." (Hebrews 11:13-16)
Labels: Church Politics