The Elements of True Friendship 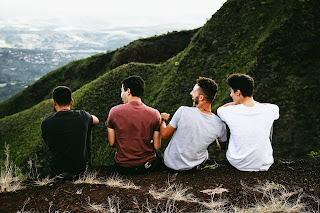 Like most of the best things in my life, having radically countercultural friendships was something I stumbled into by accident. It's not that it was unintentional - from very early in life, Christianity provided me with an idea of community that gave me a passion for developing deep relationships and a commitment to vulnerability and honesty. I have always tried to pursue those values. However, what resulted was a network of relationships far beyond what my youthful gestures in that direction warranted.

Perhaps I should start by just trying to describe what I mean:
1) I have "best friend," something unusual among males in the modern world. We have known each other for almost two decades, lived together for several years before I got married, and still talk several times a week. In many ways our development as Christians, as thinkers and readers, and as human beings is inextricably bound up in the webwork of our relationship.
2) I have a number of other male friends of varying closeness that stretch back almost as far. Every summer a group of us gather for a few days to encourage and enjoy each other. Hymns are sung, prayers are shared, cigars are smoked and discussions swirl about faith, ideas, parenting, marriage, and anything else that strikes our fancy.
3) Elizabeth and I have been blessed by a number of dear families we have shared life with over the years. They include varying levels of closeness. Some are many years deep; others are still in the early stages of mutual appreciation; still others are limited to occasional moments of joyful fellowship. Regardless, in all of these relationships, there is a shared sense of closeness that leads to substantial conversations and mutual encouragement.

I remember someone telling me that their great fear in life was that, if they ever hit rock bottom, they didn't think there was anyone who would answer the phone if they called. We know several dozen people who, if we but expressed the need, would drive hundreds of miles or tear down literal walls to be at our sides, as we would for them. What I hope to communicate, in what follows, are the (largely accidental) things Elizabeth and I did that led us to this place.

Friendship in Scripture is a robust category, as Jonathan shows in his union with David. When Jesus describes Himself as our "friend," He means something just as profound and intimate as when He describes God as our Father or Himself as our husband. The sorts of relationships we are meant to cultivate in the body are honest, bold, joyous barings of soul and risking of life. While the world is hungry for just such relationships, we have so cheapened them by impatient triteness and therapeutic nonsense that people often don't know where to begin.

As I reflect on David and Jonathan and the bond between them, four essential elements of friendship suggest themselves.

The first is simply shared space. David and Jonathan's meeting is practically an accident, a crossing of paths in court one day between a prince and a hired musician. That was certainly my experience. Every dear person I count as a friend first came into my life because it overlapped with their, often by accident. A college class, a church activity, a shared interest - our paths crossed, the first spark was struck, and it was only in the shelter of that shared space that we could begin to kindle it into flame.

I am convinced that the main reason we struggle to have many friends in our time, especially as adults, is that we have grown accustomed to building siloed lives. Our homes are fortresses from the surrounding world. Our habits are characterized by independence and aloneness. We want to be free from the demands of other people, but as a result, we end up free from the people themselves.

If we are going to pursue friendships in the present, it will require a dramatic rethinking of our habits and priorities. We will have to open our homes and tables. We will have to start inviting people to journey through life with us - going with us to the store, to pick up kids. We will have to get over our obsession with sterile orderliness and learn to welcome people into the disorganized clutter of actual life.

The second element of friendship is loyalty. Jonathan really serves as the exemplar of this quality. He so commits himself to David that it is described as a "covenant," a set of binding promises that establish an unbreakable relationship. He does not turn from his commitment to work for his friend's good, even when it costs Jonathan his father and his crown and his life.

Loyalty consists of two things. One is a commitment to the relationship regardless of circumstances. Too often we think in the reverse - we expect circumstances to dictate our relationships. This works initially as we naturally share space, but every friendship at some point becomes hard or costly. The world will try to destroy all deep relationships, and the question then is whether we will let those hard circumstances alter our commitment to each other or whether we will hold to friendship firmly regardless of the waves that batter our bond.

To commitment, loyalty adds time. It is tested only as it endures. I cannot be meaningfully loyal to someone I just met; it is only years in that such a description applies. Indeed, there is no substitute in friendship for the passage of time. Each meeting, each conversation is a bottle of grape juice stuck in the cellar; opening the first one right away will not much impress, but keep stowing them and let decades pass and you will be a wealthy man indeed. Often I meet people who ask, "How do I get a friendship like that?" The answer is to persevere in friendships that aren't like that for some years and they will eventually, perhaps, get there.

In addition, friendships require honesty. There are also two sides here. First, we must be honest with and about ourselves. Putting on your polite societal mask and going out for margaritas does not knit together souls; only when the mascara is smeared and the veil is removed can we begin to know and be known. It is a scary thing to show your true self, but the cost of keeping it hidden away is to never be known at all.

In addition, we must be honest with each other. Telling our friends the truth about their choices, even the truth about the ways they threaten or challenge us, risks the relationship but leaves us on the far side with something stronger. The only way to give steel mettle is to plunge it into the fire.

I remember when one of my closest friends told me, out of the blue, "Eric, sometimes it is hard to be your friend." Initially, I was hurt and defensive and all the other things such a statement provokes. However, as we talked through what lay behind it, I came to see both some struggles in my friend that helped me know them better and some deep issues in my own heart that I am still learning how to address. Had we kept things behind the curtain of pleasant lies, we would have much less relationship that we enjoy.

So shared space and loyalty and honesty, and then the indefinable thing that combines those two and fuses them into someone we would call "friend." This fact frustrates some, myself included, because we want a program we can follow that works 100% of the time. That is simply not the case. You cannot force close friendship, although you can provide fertile ground in which it can grow.

That said, neither is such an intangible bond as rare as one might think. The truth is that human beings are endlessly delightful, and we will find ourselves drawn to many of them when we simply open our eyes and ears and learn to find the pleasant surprises and hidden beauties that come from bearing God's image. Friendship is not a result of compatibility, as if we might take some assessment and determine on how many points we intersect. Rather, it is fueled by a joyful recognition of something good in the other, even if that goodness is one we do not share.

Nevertheless, this last element is also why I am so grateful to God for the relationships He has blessed us with. He has put the flint and the steel in people that, when they meet, flare with light. I do not deserve the community I have found; it is a gift of grace. Nonetheless, it is a gift I pray many more people would find as well.
Labels: Friendship