Should Christians Be Patriotic? 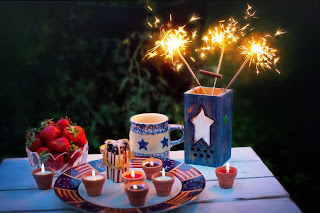 Tomorrow is the 4th of July. Like most Americans, we will be grilling and shooting off fireworks. We will also be visiting with our kids about our nation's history and appreciating the blessings God has given us in this place where we live. That said, behind the specter of the national holiday is the question of patriotism and how we as Christians should relate to this world. I wanted to spend a few minutes, as we prepare for that holiday, thinking about how to process that question.

There tend to be two sides of this debate, as there are in most discussions. One side consists of those who seem almost puzzled by the question. Why would there be any tension between God and country? America has a long history of viewing itself as a "city on a hill," and love for Jesus and for the state have often been viewed as two sides of the same coin.

On the other, some Christians have become deeply suspicious of any display of affection for the United States. Viewing the first group as having sold out Biblical fidelity in the name of nationalistic zeal, they stress the (many) historical failures of our nation and feel that any praise for the state is dangerous.

Both of these groups have one instinct that is good but another that leads them astray. Much of the struggle rests in two different visions of what patriotism means.

One vision views patriotism as placing the good of the community above selfish ease. We are all placed by God in particular neighborhoods, communities, and nations. We are called to serve those particular places. In this sense, to be "patriotic" means to recognize the common good of this place and to seek to protect and bless it.

This is the definition that those defending patriotism tend to lean into. The mythological figure of the "American soldier," willing to lay down his life for freedom from tyranny, is the archetype through which they view national celebration. This heroic character does not take the easy route of comfort, staying at home and looking out for number one. Rather, they willingly sacrificed their safety in order to win it for others. This archetype speaks to the calling to seek the common good.

In this sense, patriotism is a praiseworthy thing. We should all recognize that we are given a choice between a way of living that is only for the self and a way of living that prioritizes the other. It is all too easy to fall into the trap of the former. More than that, this idea of patriotism rightly challenges us to recognize that we are called to seek the good of our community and country - not in a way that does evil to other communities, of course, but in a way that nonetheless acknowledges that this is where God has placed us. Stewardship must always be particular - trying to care for humanity in general tends to undercut our ability to help actual human beings. We should love our nation, just like others love theirs, because it is the nation God has most immediately given us to love.

That said, it is also possible (even easy) for this love to become disordered. This is the other vision of patriotism, the problematic one - confusing our earthly citizenship with our heavenly one. We as Christians are called to be "in the world" and to love the world but also to recognize that we are not "of the world" and that its systems are all ultimately opposed to the kingdom of God.

This is the definition those opposing patriotism bring to the fore. There is ample ammunition for their cause. The church has often compromised with national sin, including in America. One need look no further than the way we have at times baptized slavery or militarism or consumerist greed as biblical goods simply because they are American. More than that, in a world where white mainline Protestant Christianity has essentially become the religious arm of one political party while white evangelicalism has become the arm of the other (the black church is more complicated), there are good reasons to suspect that we have been engaged in robbing Peter to pay Uncle Sam.

Both views, left to themselves, pick and choose which realities of our country they want to focus on. America has done some wonderful things, serving as a leader of freedom and human rights in the world, opposing authoritarianism, and being a land of opportunity for many. America has also done some terrible things, from our tenacious attachment to racial resentment to the mass extermination of American Indians to the colonialist impulses that have led us to destabilize whole nations. While the pro-patriotism party tends to focus only on the former and minimize the latter, the anti-patriots often only see the failures while underselling the profound blessings of living where we do.

Ultimately, the problem for both views is that neither takes the time to pick apart what a specific instance of patriotism means. It tends to be jumbled together by both sides.

Those defending patriotism, while they might intend to be speaking only of selfless sacrifice for the freedom of others, inadequately appreciate the dangers of Christianized nationalism. America in Scripture is, just like every earthly nation, somewhere between Babylon and the Beast. It might be an unusually tamed iteration of this spiritual enemy, but the loyalty of worldly powers will always bend toward the world rather than the kingdom of God. We should love America in the sense of "seeking its good," but that does not mean "seeing it as always right."

At the same time, those opposing patriotism fail to appreciate the nobility (and challenge) of seeking the good of something beyond oneself. While worried about making the country an ultimate good, what can result is an inaction that is indistinguishable from lazy self-indulgence. The role of the critic is easy. It is also necessary, lest we end up building something we later regret. However, a world of critics will never make anything good - or, for that matter, much at all. Only by buckling down and seeking to love and serve this country, in deeds as well as in words, with gratitude for its beauty as well as grief for its failures, will we see good fruit.

All of that being said, as Christians, it is true that we must be reminded that our true citizenship lies in heaven. Regardless of your tendencies in terms of earthly patriotism, there is a higher allegiance we must maintain. Love for nation and critique of nation are both enterprises of this age; we must never let either distract us from the new humanity we have in Christ and our call as the church to be that true "city on a hill," a community of faith meant to show God's glory to a watching world.

So this 4th of July, celebrate the common good. Appreciate the calling we have to serve our neighbors in the context of this country where we live and show the spirit of Christ in this service, counting its good as greater than ours. At the same time, do this with a clear recognition that this world is passing away. America, like Rome and every other earthly power, will ultimately be judged and found wanting on that day when the kingdom of God comes to dwell with man. We must always remember that is where our first allegiance lies, lest we find ourselves judged with it. May our prayer be for that kingdom to come, but may we work to bless these earthly kingdoms where we now dwell in expectant exile.