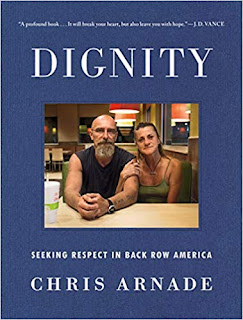 Dignity by Chris Arnade. I have always been aware of growing up with a foot in two worlds. On the one hand, I was raised in a house that valued learning and was instinctively high-cultured, I have a graduate degree, and I move comfortably in the circles of educated "elites." On the other, I grew up around farmers and now live and minister in the semi-rural midwest on the edge of a blighted post-manufacturing city. Chris Arnade would call those groups the "front row" and "back row" of American society. He was far more entrenched in the front row that I, a Wall Street banker with a Ph.D living in New York City. However, thanks to a personal odyssey brought on by the financial collapse, he has spent the last decade photographing and moving among people much further in the back as well. Dignity is his attempt to give voice to what he learned and encountered among the drug addicted, the homeless, and the deeply impoverished.

What makes this book so phenomenal is that Arnade took the time to truly understand the world he documents. There are plenty of people who have made six-month forays into one community's struggles with poverty, but their diagnoses tend to be shallow because they themselves are still stuck in front-row ways of thinking. By spending a significant chunk of his life trying to really know such people, and by interacting with them all across the United States, Arnade transcends such compassion-tourism and seems to really grasp both the beauty and the brokenness of the lowest runs of society's ladder. Reading was immensely helpful to me in that it gave me labels for a number of trends I have long noticed; for those with both feet in the front row, it will hopefully serve to deconstruct the patronizing attitude many bring in the name of "helping" and provoke some questions about whether the ways we have structured our society as a whole are really for the best.

I should also mention that this book is enhanced by the photographs. While the text has plenty of insights, it is by looking into the eyes of truly broken people that everything comes together. If you're going to pick this one up, make sure it's a physical copy. 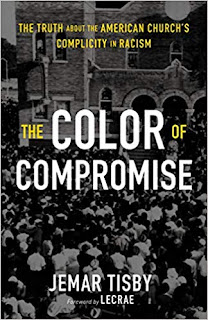 The Color of Compromise by Jemar Tisby. I don't know how to discuss this book without potentially wading into controversy, so I'll just share a few basic thoughts here. Tisby seeks, in the Color of Compromise, to tell the story of racism in America, focused especially on Christianity and its role of complicity with many of the injustices from the past to the present. It is almost wonderful in this regard - such a book, written at such an accessible level, is deeply needed. However, a few failings keep me from being able to use it the ways I wish I could.

First, the good. Tisby is an excellent historian, and he paints a damning portrait. Starting with the first slaves brought to America early in the colonial period, he traces the development of black slavery and white racism in sometimes-painful detail. He is especially good at deconstructing the myths that try to whitewash certain historical heroes. As a theologically-trained evangelical, Tisby is also able to handle the Christian compromises with alacrity. The way he tears the halos off of much-revered American Christian figures like Whitefield and Edwards is especially effective. Likewise, he vividly illustrates the compromise of all of American society from the white house down to most people in the pews with post-Reconstruction segregation and lynching. I've long wished for a book that I could give to thoughtful laypeople to walk them through these sordid details, and in terms of the history, this is certainly that book.

Now the weaknesses. One is ideological - Tisby seems trapped between two ways of viewing the world, and they at times undercut the points he is trying to make. On the one hand, much of his critique rests on the argument that all of this was avoidable. People could have built a different world, and there are points - like the early colonial period or that just after the civil war - when they might have. On the other, he also wants to insist that racism is intrinsic to human fallenness and that it never disappears, just taking on different forms. The fact that he seems torn between which of these is the case weakens some of his historical analysis.

The second is practical. In the final chapter, Tisby digs into a number of suggestions for challenging racism both individually and structurally. Some of these are excellent. Others are hugely controversial, with reparations being the one most discussed. My issue isn't with the fact that he touched on the latter types of solutions - I'm actually sympathetic to some of them. However, the challenge with things like reparations has always been how we could implement them in a way that would be both just and beneficial. He handwaves these questions, simply noting that there are "challenges," but then jumps ahead to insisting people ought to accept the idea. Since the devil here is truly in the details, I'm not sure you can make that demand. What's more, it means that many who might otherwise find themselves challenged by the historical elements in a way that begins to shift their thinking will find in some of these recommendations a reason to reject the whole enterprise.

That said, with those caveats in place, I think this is an important book, particularly for white Reformed/evangelical Christians to engage. As I tried to express on here in a post I wrote a few years ago, we cannot understand our legacy in this country without recognizing the bloody shadow cast by our consistent compromises in this area. 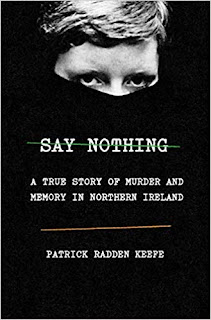 Say Nothing by Patrick Radden Keefe. Ostensibly, this is a true crime story about the disappearance of Jean McConville from Ireland in the 1970s. Really, it is a history of the Irish troubles, painted in vivid detail and centering on some of their most colorful characters. While I've been aware of the politics swirling around this period of violence, the specific events and characters were new to me. Keefe is a phenomenal writer of narrative history, and you couldn't resist being pulled into the web of intrigue and larger-than-life personalities he weaves.

What makes this book especially good is the way it views every character through a lens of both sympathy and judgment. Provos like Brendan Hughes and Dolours Price are pictured as both dashing freedom fighters and hardened zealots willing to kill to advance the cause of Irish independence. Likewise, the British, while more in the background, are clearly caught between an understandable desire to fight terrorism and their own willingness to break their laws in the name of expediency. Part of this is aided by the specific focus on McConville's murder - it is one thing to watch IRA members in running gun battles with the police, but quite another to consider the devastation of her ten children when she was "disappeared," never to return. 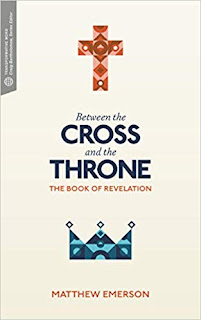 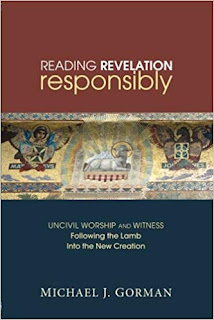 Between the Cross and the Throne by Matthew Emerson and Reading Revelation Responsibly by Michael Gorman. I'll keep these brief, since they are part of a larger project preparing to preach through the book of Revelation in the fall. Between the Cross and Throne is probably the best layperson-accessible introduction to reading the book; I'm planning to have it on the book table during our sermon series for folks to pick up. Reading Revelation Responsibly is a good, longer-form argument for a non-dispensational approach to the book, although it suffers a bit from being so worried about avoiding the errors of that Left Behind/newspaper headline theology that it probably undersells some of the more difficult sections of the narrative, especially those about divine judgment. That said, it would be a useful read for someone wanting a more scholarly intro.
Labels: Books