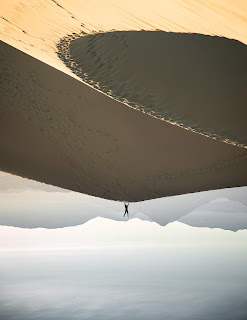 Note: This is the second of a pair of posts discussing the idea of "missional Christianity." The first is available here.

We make it a point with our children to pray each night for a certain country and the missionaries we know there. Curious about what they had internalized from this practice, I asked my oldest son what a missionary was. His response was that “a missionary is someone who moves somewhere cool for Jesus.”

This betrays a fundamental divide in how we think about the world. We tend to think of God’s mission that exists “out there,” usually in foreign countries, and that it is people going to such places that are at the heart of God’s mission.

However, as we discussed last time, the mission of God is an all-encompassing category. It involves everything He has done to preserve and redeem His creation, and it calls us into this work of preservation and redemption. Thanks to this fact, we need to adjust to the idea that the church itself must be on mission – that we must all in a sense be missionaries in the places God has put us.

This is not an unfamiliar idea – anyone who has spent time around evangelicalism has been told that they should be a missionary to their friends and neighbors. However, we don’t always have a clear sense of what that means. The simplest way I know to express what this looks like in practice is to talk about the “missionary posture.” Someone on mission has a certain view of what they are doing in the world.

The missionary posture is this: we are each called to go into the world with the gospel attentive to the Spirit in community. Each piece is essential if we are to live as missionaries in the world.

First, the missionary posture involves going into the world. This doesn’t mean moving somewhere new; “the world” is all around us. It is how Scripture describes the whole of unredeemed creation, including the human beings and human systems that compose it. Every time we step out our door (or invite someone into it), we are engaging with the world.

However, to live in the missionary posture we must understand that this is what we are doing. If our citizenship is in heaven, that means that every interaction we have with someone who isn’t a Christian is in a sense an international, cross-cultural experience. Our neighbor isn’t closer to God simply because we both live in the United States rather than Japan; he is just a much a part of God’s mission field.

Of course, this also means that Christians should be engaged. You might not be called to move to South America, but God is calling all of us to movement toward our neighbors, toward the marginalized and toward our communities as a whole. We should not ghettoize ourselves but rather live in a way that constantly overlaps with the surrounding world.

Second, we go into the world with the gospel. By this we first mean that we have internalized the gospel and made it the foundation for our lives. You can’t successfully proclaim what you haven’t loved for yourself. The good news of God’s gracious salvation in Jesus’s death and resurrection is the foundation for all of Christianity. We need to constantly preach and re-preach the gospel to ourselves.

Once we have done this, we then live in a way that shares that same gospel with the world. By this I don’t simply mean “be a good person.” Instead, I am talking about a way of living that both exemplifies the gospel and transparently explains the connection. For instance, when you mess up, openly and unreservedly repent and ask for forgiveness. Then, when such contrition provokes curiosity, explain that the foundation for this free repentance is the fact that Jesus has already justified you by His cross, so you don’t have to pretend like you don’t have issues and try to justify yourself.

Joined with this gospel-centeredness is an attentiveness to the Spirit. A missionary in the traditional sense is not someone who shows up and starts God’s work. God is already at work and a missionary moving to a new place, even a place without the presence of the church, is first called to look around for the places where God’s Spirit has been moving.

The missionary posture means that we have this same expectation and are constantly on the lookout for where God is at work. What are values and beliefs we can affirm and build upon in our culture? Who are the “people of peace” who are open to the hope of Jesus? What opportunities are arising for me today to act and speak in distinctively Christian ways that express the love of Christ? One of the greatest failures in our joining with God’s mission is simply our inattentiveness. Every day presents opportunities to work for the kingdom; we simply don’t have eyes to see them.

Lastly, we do this in community. This is often missed, but is absolutely essential to the fulfillment of the mission of God.

One of the paradigm shifts of the last two centuries of history in international missions has been the movement from focusing on individual conversions to seeking to build indigenous, self-supporting, self-replicating churches. The church in community is far more effective at proclaiming the good news than individuals in isolation.

This happens on two levels. One is that the church equips and encourages each of us on our individual missions. We will burn out or compromise without the support of community. However, more importantly, the church also provides an essential tool in that mission. Often it is by moving people into a gospel-believing, Christ-reflecting community of faith that the person comes to believe the gospel for themselves. By seeing the good news of Jesus acted out between believers, the message itself becomes somehow more believable.

So our calling is to reflect on this question: what does it mean to adopt this “missionary posture” in our lives? What would change about how we viewed our neighbors, our jobs, and our time if we realized that we are each called to go into the world with the gospel attentive to the Spirit in community?

The thing to realize, though, is that a community of Christians living out this mission is truly a force for change in the world. What made the early church so effective was its recognition that it was on this sort of mission – every early believer was living in this missionary posture, and as a result the world was remade. That same calling and that same impact are possible for us if we will be attentive to God’s mission and how it should change our lives.