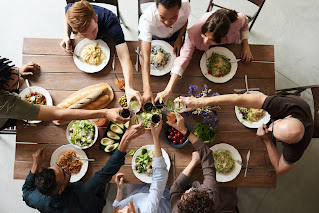 There are two competing models of church in our world. One is biblical, the other American. I first realized this truth when I was 19 years old.

I was in college, attending a vibrant and messy church that had only been planted a few years before. It was a deeply theological church, but also deeply relational and honest. It loved Jesus and the gospel and broken people. The first Sunday I visited, I watched the way people embraced and laughed and cried together and I knew it was the place I would call home. It has shaped my vision for ministry to this day.

My realization came one Sunday when I found myself sitting next to a fellow college student whose parents were in town to check up on her. I knew from a few brief conversations that they were devout believers, albiet the sort of devout believers who had somehow raised a daughter who hadn't heard the good news of God's gracious salvation until she went away to college. I also knew they went to a big, famous church in a big city far away.

The service had just begun when the criticisms started: whispered, but not quietly enough to keep me from eavesdropping. I believe they first complained about one of the musicians playing too loudly. Then it was the Scripture reader, whose literacy they snarkily questioned as she stumbled over some words. The sermon review was: "Fine, but not as engaging as it could be." I believe I also overheard the term "unprofessional" at one point.

I don't remember much about the service itself, but I remember that I was enraged. I wanted to shake them, to yell at them, to try to explain the things they didn't see.

Fortunately, I didn't speak my mind to that visiting couple. I think their daughter was embarrassed by it all, and a little sad. However, that overheard litany of criticism lead me to recognize that in our world, some people approach the church as a community, while others, shaped by our culture, approach it as consumers instead.

The hallmark of "consumer church" is that it treats the worship service as a good produced by "the church"-an entity outside of us-which I then ingest. My job, when we gather for worship, is to be served and then to compensate those serving me with an appropriate monetary donation. Sure, such Christians might talk about "community," but what they mean is that the church is a civic organization through which they might meet some buddies to play golf or share dinner. Church is ultimately about my needs, and is to be assessed in terms of how it satisfies me.

There are many symptoms of this mindset. Perhaps the easiest to see is the professionalization of many modern worship services. In Scripture, the believers share their gifts with each other, each bringing something to give. In consumer church, we pay gifted people to give their gifts to us. Just ask the question: how many of the people up front on a Sunday morning at a given place of worship are only there because it is their job?

I don't mean we should never have anyone hired by the church from the outside. It makes sense that a few key leaders might be brought in, especially those who require seminary training. It also doesn't mean we might not pay certain members who especially sacrifice of their time to do things like lead music or care for the facility. However, our expectation should be that those people normally arise from within the church and that their compensation is a sign of our relational care. I have known multiple friends, especially musicians, who are on staff at a church to provide the music but who then attend another church because it is where they actually live their spiritual lives.

Another symptom of consumer church is the constant churn of members. Especially at places that offer large, highly produced services, the back door tends to be huge. I remember a friend giving me the rundown of the five megachurches in his town and explaining how, when each of them started, they grew quickly, then fell off and shrunk to about half their peak size. Why? Because a new church started and people moved on to see that show. He knew this because his family had moved between several of these churches during his childhood, and many families he knew had moved with them. Again, this doesn't mean we can never seek out a new church, but it means there should be a seriousness and slowness to such a decision, and the criteria for making it should have nothing to do with who is doing new and exciting things.

The clearest sign of a consumer church mentality is the one displayed by the couple I encountered in college: congregants adopting the posture of the critic. This can happen in churches of any size. When the question over lunch is not "what did God's Word say" but "how did the preacher do," that is the posture of the critic. When songs are listened to and graded as performances rather than entered into as praise, that is the same posture. At root, the critic views church as something being done for them, and they analyze it in those terms.

The church is called to gather for worship first to serve God and secondly to serve our fellow Christians. We are blessed ourselves as we undertake these callings, but our needs are not central. While there are things we should in a sense be critical about (Was the sermon true? Does the leadership have integrity?), we should speak about a worship service not as we would a dish at a restaurant but instead as we would about a family meal.

Because, biblically, the church is a community. All of Scripture's images of it stress our interconnectedness. We are a family, the parts of a body, the stones in a building. You don't talk smack about mom's cooking. The hand doesn't try to cut itself off from the arm because it isn't muscular enough. A brick finds its purpose in helping to shoulder the load.

This reality doesn't preclude an appropriate seeking after excellence. It demands it: I show love for my family by cooking a good meal, not by dumping a can of cold beans on their plate. However, the excellence we strive for is motivated by relationship, and it is never done at the expense of others. Sometimes we are just going to have leftovers because one of the kids got hurt and needs some extra care.

We are called to view the church as a community, not as something to be consumed. What we need to recognize, though, is that often we end up caught somewhere in between.

It is easy, laid out so starkly, for us to recoil from ideas of consumer church. In truth, few people embody them as starkly as those cold parents I sat beside. However, it is in the air we breathe. The whole shape of society trains us to consume. Billions of dollars are spent trying to warp our hearts in that direction, because it keeps the gears of our economy turning. As a result, it is easy for it to start to creep in, even when we insist we believe that the church is part of the family of God.

I find it in my own heart: I can at times have an impatience and wish for a professionalism that runs counter to what I believe. We must each be constantly seeking to push back against it and press into life as brothers and sisters in the household of God. So let's examine ourselves and remind ourselves of what is true, and so let us joyfully go forth as a community of grace.