Falling Out of Love With The Wrong Things 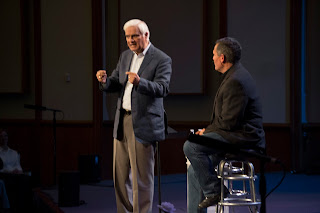 My heart has been heavy yesterday and today as I read some of the reports about Ravi Zacharias and his scandalous double life. There are many true things that could be said about how and why these things happen, about the need for accountability, the dangers of cultures that promote or conceal abuse, or the pernicious corrosion of temptation we all face. However, what I find myself reflecting on is my own experience growing up within evangelicalism.

I realized very early that, in many evangelical circles, being smart and articulate was often confused with spiritual maturity. In high school and early college, I was given all sorts of leadership and teaching roles in churches and other ministries. I preached my first sermon when I was 16(!), wrote songs that people sang, and was leading bible studies for people older than I was, all while less than two decades old.

The thing was, my heart and character were absolutely not in a place where people should have been listening to me. I didn’t have the sort of extreme moral failing of someone like Ravi, but I was foolish and going through all the youthful rebellions and boundary-testings normal at that age. By being given a place of minor but real influence while at the same time not having the virtue to match, I was being trained to live inconsistently. Nobody came out and said it, but the knowledge of how much I would disappoint people and how much my sin could hurt people created an instinctive pattern of covering it up.

Thankfully, I ended up in circles of friends and mentors who didn’t buy into this evangelical obsession with giftedness. I remember a conversation I had with the pastor of the church where I first realized this problem. I was 19. I told him I felt like I might be called to the ministry, about the studies I was leading and the books I was reading. I expected to be patted on the back and welcomed into the inner circle. Instead, his response was a slightly-gentler form of “come back in a year or two after doing life with us and we’ll talk.” At the time I was ticked off; in retrospect, I’m incredibly grateful. Over those years I stepped back from living out of my abilities and had the space to actually confront my sin and God’s grace. While I did end up using my gifts (and that pastor did invest in my as I moved into ministry), it was only after I realized that they weren’t what mattered to God.

Of course, some of the tension between giftedness and character is unavoidable in our lives. I still wrestle with it as a pastor; while not masking some great scandal, there are many ways I’m tempted to dress up the areas I still struggle. To pretend like I am more prayerful than I am, that I don’t wrestle with the doubts and ugly thoughts I sometimes harbor, that my anger or pettiness is somehow a high-minded pursuit of purity and truth. Some of that temptation just comes with the territory.

But perhaps uniquely in the history of the church, the blend of American entrepreneurialism, technology, capitalism and rugged individualism has fused with biblical Christianity in our day in a way that makes the whole thing much worse. We value all the wrong things, and promote people based on those values, and they shape the next generation to pursue those wrong values rather than the way of Jesus, and little wonder the evangelical edifice creaks under its maldistributed weight. 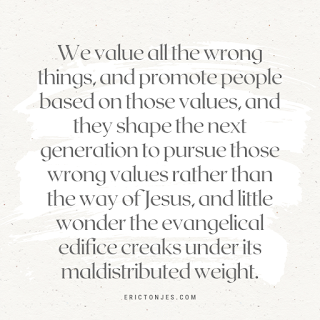 Here is the simplest test I know to show this: think about all the famous preachers you know. What are the things people praise about them? What are they famous for? Their ability to communicate, to think, to entertain, to argue, to articulate, to build, to lead? None of those qualities have anything to do with Christian virtue. The church and Babylon contain them in equal measure. If we make those our qualifications for selecting who we let be influential over us, why should we be surprised that many of them fail to display the character of Christ?

I say all of that as someone who, while certainly not to the degree of those mega-influencers, has many of the same gifts. One of the things I constantly try to remind myself of is that those things are not what Jesus truly uses to build up His church. Sure, they can have a secondary role, but what He seeks is faithfulness, love, and hope. He desires humility, self-control, gentleness and wisdom. He calls us to mercy and transparency, kindness and service, living for others and dying to the world.

My deepest fear is not failure in the mechanics of ministry but that I might succeed at impressing people and filling pews only to find, at the end, that I had done it to build a kingdom for something other than Christ. After all, the size of the crowds and the number of conversions Ravi racked up in decades of ministry are now the measure of the spiritual damage that he has caused.

So why don’t we elevate pastors with such virtues? Why don’t we make more of character and Christlikeness?

A lot could be said on that front, but let me try to name just one problem: the structure of our evangelical world simply isn’t built for it. You cannot see those things displayed on a global scale or a smartphone screen. Without sitting in a room with someone, without breaking bread with them (or at least breaking bread with someone who breaks bread with them), such qualities are hard to discern and easily faked. Indeed, those who truly display Christlikeness are often going to do the exact opposite of what gets them a big stage and a ministry that bears their name. So we need to stop making the core of our spiritual hope people with lots of YouTube views or Twitter handles. Sure, they will still exist, and we can get good content from them, good information and insight, but when it comes to those we look to for spiritual guidance, that has to come closer to home.

Experiencing this reality has always been the counterweight to my heavy heart when such grievous sins by public figures come to light. It saddens me, but it doesn’t cause me to despair for Christianity, because such famous people have long been secondary to my life in the church. I have seen Christian character and relationship done up close, in the lives of friends and members of church families. I have seen godly leaders who die to themselves to build up the body of Christ. (I’ve seen my share of ungodly leaders as well, but at the proximity where I was able to recognize their sin rather than simply being enamored by their gifts.) I’ve been blessed to see churches that are living as the church, and I pray that I can be a part of that. Those are the places where Jesus’ kingdom truly grows. However, we won’t find them as long as we keep chasing the prettiest thinkers and cleverest talkers as if they can show us the way.