Is All Sin the Same? 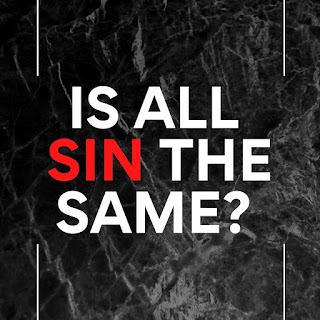 Truths are lies when the are misapplied. One of the most common failures I feel like many Christians (and pastors) make is that we haven't reckoned with this fact. We take certain teachings and ideas in Scripture and connect them to situations where they don’t belong. We make truths into truisms, bumper stickers to slap on any surface, and there is real damage that results.

I was thinking about this recently as I dialogued with a few folks about what I wrote about the scandal surrounding Ravi Zacharias, who internal investigations found had misbehaved sexually in some truly egregious ways. What I noticed was the way certain Christians immediately went to familiar statements: “We’re all sinners.” “Sin is sin.” “I am no better than him.” “There but for the grace of God…” etc.

The reason I struggled in these conversations is because none of those sayings are untrue. However, I think they are dangerous in such cases of scandal because they are not saying all that Scripture would say, and so I want to spend some time discussing what is true about them and then how they can be destructively misapplied.

In the first place, the root of statements like “sin is sin” is a biblical insistence that we cannot justify ourselves simply by comparing ourselves to others. We ought not adopt the posture of the Pharisee who prays, “I thank you God that I am not like this publican.” Evil is not graded on a curve; the fact that mass murderers exist doesn’t make single homicides any better, and the fact that I have managed to avoid killing even one person doesn’t make me innocent of the ways I’ve used and hurt others.

Likewise, all sin separates us from a holy God. This is because sin is, by its very nature, rebellion against God and an assault on His holiness. It puts us in opposition to our Creator, and we cannot paper over it simply because our personal war on heaven has only used conventional weapons. We must all be saved by grace.

What’s more, there is an ultimate sense in which “there but for the grace of God go I” is an appropriate attitude. We could all be much worse than we are, and it is mercy that we are not. While we work out our salvation with fear and trembling, we do so recognizing that it is God who works in us.  We don’t deserve ultimate credit for the good in us: God created us, God providentially shapes and grows us, and God deserves the glory for what He has made.

However, I have three concerns if this is all that we say about topics of scandalous and destructive sin.

First, while all sin is cosmically equal in that it is rebellion against God, that does not mean all sin is equal in terms of its consequences on others or of God’s judgment on it. Scripture makes clear that in eternity there are degrees of punishment for sin (Matthew 10:15, 11:22-24, Romans 2:5, Hebrews 10:29). Even within history, some sins have far more destructive effects. When David rapes Bathsheba and kills Uriah, that sin costs him the life of one son, the loyalty of another (in Absalom’s rebellion), shatters his family, and is ultimately the root of the generational brokenness that splits the kingdom and leads it into exile. Had he looked at her with lust but then restrained himself from acting, while that still would have been a grave sin in the eyes of God that demanded repentance, its destructive consequences would have been much less.

Why do I think this needs to be said? Because people are hurt by sin, especially by certain sins, and we are cruel when we pretend like their wounds aren’t grievous and undeserved. We need to mourn with those who mourn, especially those who mourn wounds inflicted by others’ evil. To tell a child beaten by their parents that yours weren’t perfect either is to lie to them about the horror they have faced; to respond to a man who has raped or extorted sex from dozens (maybe hundreds) of women with false equivalences treats his victims the same way. We should be able to look at such situations and say, “This is truly wicked, exceptionally wicked, and God’s anger is burns against such things.” Indeed, I worry that the fact we can't reveals that we are more worried about the perpetrator (downplaying what he has done) that the victims who deserve our compassion and care.

Of course, to stress what I said earlier, that fact doesn’t mean we should make light of our own sin. We should be fighting it at the roots, not excusing it because it hasn’t born such bitter fruits. Yet in doing that we don’t need to sacrifice our ability to differentiate between evils. God does it all the time.

A second reason I get uncomfortable with such rhetoric is the way it is applied to leaders of the church. Certainly, all of us as pastors and elders are sinners who depend on the grace of God alone. We are all “unqualified” for ministry if being qualified means being perfectly righteous (or even close). Yet because of the power of those with influence in the church, Scripture demands that they be qualified and accountable in a lesser but real sense. There are issues of sin and character that mean someone shouldn’t hold such positions (1 Timothy 3:1-7, Titus 1:5-9). These requirements exist precisely because of the potential damage those in such positions can do to the reputation of Jesus and the members of His church.

The language of grace sometimes gets (ab)used to sidestep questions of character and qualification. It is true that we are all deeply sinful, justified by the blood of Jesus alone. However, that doesn’t mean we are all at a given point in our lives qualified to be leaders in the church. Because my child is in my family, they have the right to my love and affection and a place at my table. That doesn’t mean my 8-year-old gets to drive the car. God is unbelievably gracious, and if Ravi Zacharias truly repented of his abuses and cast himself on the mercy of Jesus (sadly, there is no evidence of this), we could meet each other in heaven some day, and we would both have gotten there the same way. However, he had no business being in any position of influence or authority, and the fact that he was only multiplied the guilt and judgment he faces.

I say all of the above with a real sense of fear in my own heart. I often reflect that, in a matter of hours, I could disqualify myself from being a pastor for years to come, perhaps my whole life. However, that fearfulness is appropriate to those in positions of power. It is Paul’s heart when he declares, “But I discipline my body and keep it under control, lest after preaching to others I myself should be disqualified.” (1 Corinthians 9:27) Some leaders assume their position is owed to them, or that God’s grace means they could never lose it, and that creates soil ready for abuse. Likewise, churches need to be empowered to stand up against such leaders and to hold them to account. God’s grace is never permission for abuse.

Which ties into my last concern about how quickly we run to easy equivalencies of sin. It makes us sidestep the very real question of how on earth something like this happened. There is no structural solution to sin as a whole. It is ultimately a battle each Christian must fight in their own hearts. You can’t create programs, systems and accountability relationships that deliver me from the responsibility to struggle against my own pride, greed, lust, anger, or fear. However, there are clearly structural issues that exist when a man spends decades extorting pornography from vulnerable women while at the same time filling stadiums with adoring Christian fans.

In almost every instance of a major evangelical celebrity failing, if you look at the after action reports that trickle out a few months later, you are left shaking your head. Even in situations (like the RZIM one) where it isn’t clear that anyone else explicitly knew what was happening, they all participated in a system that gave one man unbelievable power and allowed him at the same time to design his own systems of accountability. Even if it hadn’t been abused, it never should have been allowed to exist. Especially in the entrepreneurial world of American evangelicalism, if we want these things to happen less often, we need to start having serious discussions about how we structure our institutions and churches.

All of which is to say, we should name and grieve our own sins. We should use scandals like this one to check our hearts and repent. However, we should not stop there. We should also confront the true horror of the scandal, embrace its victims, reflect on the need for character in leadership and try to build and be churches that are prepared to detect and oppose such abuse.