Friendship in Light of Eternity 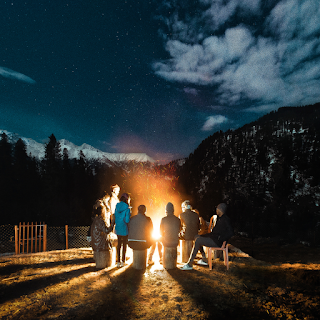 I recently had to announce that the kids and I would be moving to be closer to family. There have been tears shed and a deep sadness at relationships lost and excitement at relationships regained and future ones still to form. That process has me reflecting on a truth which, in conversation with some dear friends, I have come to call “friendship in light of eternity.”

Start here: as we participate in the life of Christ, humans are immortal beings. We will die, but our bodies will be raised imperishable at His return. Yet that is only the start; after the resurrection comes… well, forever. Which is a nebulous concept, so instead let’s say a billion billion years, although of course from the perspective of eternity that is only a drop in the bucket.

Consider what a human being can become over a billion billion years, especially without sin and its effects. For instance, how will we talk to people in the new heavens and new earth? Will we all speak some new heavenly tongue or have supernatural translators in our heads? Perhaps, but it seems to me just as likely that we will communicate by simply taking the time to learn each other’s languages. All of them. You could spend 10 years practicing each of the 7,000 languages on earth and you haven’t even made a dent in those billion billion years. And with a heart of perfect love for neighbor, you won’t mind the inconvenience either. It will seem the least you can do.

That is one instance of a larger truth. Because we are finite and God is infinite, we can continue to better know Him and His creation for an infinite amount of time. Human life is meant to be one of learning and growth, and the mind fails when we consider what remarkable creatures we can become if we extrapolate such growth over unlimited time. Enjoy the violin? You can spend 10,000 hours practicing it and find it hardly anything at all. Same for engineering or pottery or math. The new creation will be one of constant revelry in just how much more there is to discover and become.

And now for the relational payoff. Think of how that transforms our view of others. Say there are ten billion people in that new creation: I still have a hundred million years to spend growing to know and delight in each one of them. I could wander off for a thousand centuries, say exploring a nearby galaxy, then pop back in on some old friends, and we’d still have all the time we could want.

And again, those relationships would exist without sin. We would have unhindered enjoyment of the other for the person God made them to be, never threatened by their accomplishments, never diminishing them in our pride, never worrying what they were hiding behind a mask of deceit. God’s infinite glory is displayed through us as His image-bearers, and we will forever be returning to each other in wonder at the further ways His glories will be revealed.

To bring all of that back down to this moment: think about what that means for our friendships here and now.

It means that we have time. We don’t have to suck every last drop of marrow from the bone in this moment, or even in this life. After all, a few millenia into eternity this life will already seem but a preamble, and a million years in we’ll struggle to remember when this age ended and the next one began. We can enjoy the moment for the moment because it doesn’t have to be any more than that.

It also means we can pick up where we left off with each other. I recently got to sit with a couple I haven’t been with in person since college. It was delightful to see the story God had been telling in their lives. Because we have the freedom of eternity, we can take that posture. The decade-and-a-half in between wasn’t lost; it was simply a period of growth apart that creates rejoicing when we are together again.

Friendship in light of eternity means admitting that we were created for far more relational closeness than some of us realize. Remember: we have a hundred million years with every single individual God has made. Just to start with. That reveals the sinful ways we fail to appreciate the bottomless depths of God’s image in each person. It also challenges us to love and know those around us. We’re going to be spending a whole lot of time together; we might as well get acquainted now.

And perhaps most sweetly, it means that friendships are never truly lost. Not if they are friendships in Christ Jesus. Neither distance nor direction nor death itself will ultimately keep us apart; we will be reunited on the far shore of the river even if we never meet again on this side. Which call us to a reckless abandon in love, knowing that those we give pieces of our heart will always be there for it to be found again.