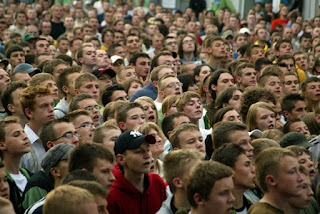 I've been preaching through the Sermon on the Mount at church, which I'm sure could have a whole slew of blog posts devoted to it. But today I found myself reflecting, not on this grand sermon, but on what comes immediately after it.

In Matthew 8, Jesus has just finished preaching to a huge audience. We are told that “great crowds followed him.” (v. 1) And as he is descending, he comes upon a leper. And, with this great crowd following him, Jesus stops and has a conversation with this leper and heals his diseases.

And then he walks down towards Capernaum. The way the story is written, it seems as if this might still be the same day. And Jesus encounters this Roman soldier with a sick servant, and he has a conversation with him, and uses his faith as an example for his followers in a teachable moment, and heals the servant.

And they come to Peter's house, and Peter's mother-in-law is sick, and Jesus heals her too. And late into the evening after all these encounters and miracles and preaching one of the most famous sermons ever, more people are brought to Jesus and he spends time ministering to each one.

There are two things that stick out to me about Jesus's behavior. One is simply that he sees ministry as about individual people. Jesus doesn't deal in the aggregate; he isn't the executive pastor making sure the systems run smoothly and truth is dispensed as efficiently as possible. Jesus encounters specific human beings, and he stops and sees them and ministers to them in the specific ways they need.

That is a model to us of ministry – if ministry is done without people as its main aim, it is not the ministry of Christ. Whether it is the Puritan preacher with his separate hallway from his study to the pulpit or the talking head on a video screen, there are all kinds of ways we confuse administering truths with ministering to actual humans. The first part is important – you can't have ministry without it – but Jesus stands as a reminder that the second part is just as crucial. Maybe even moreso.


More than just ministry, Jesus's behavior should be a model for Christian obedience as a whole. One of the things you can't help but notice in the Sermon on the Mount is the deeply relational character of the righteousness Christ teaches. Nowhere does he approach piety as simply a set of private virtues. Instead, all of righteousness deals with either how we relate to people in thought and word and deed, or (as in his teachings on prayer and fasting) in how we relate to our heavenly Father. Virtue is only virtue when it is manifested as love, either for God or for neighbor.

Virtue is only virtue when it is manifested as love, either for God or for neighbor.
Jesus views ministry and obedience as fundamentally relational. It is about human beings. And because of that, it is also deeply improvisational. It is messy, and there are no simple methods for achieving it.

One of the striking things about Jesus is that his responses are impossible to predict. Sometimes he simply heals a person. Other times he extols their virtues. In still other cases he comes with a rebuke – the young man later in Matthew 8 asks to follow him wherever he goes and Jesus says “Foxes have holes, and birds of the air have nests, but the Son of Man has nowhere to lay his head.”

Now we need to be careful how we hear this. We can hear “improvisation” and think that means doing whatever we want. Ask any jazz musician or actor, though, and they'll tell you how wrong that is. Improvisation always requires a sense of the structure within which you're performing. It's the difference between watching Who's Line Is It Anyway on TV and watching my kids “cooperating” to tell a story. “There's a princess riding a unicorn,” one says. “But the princess is an alien and the unicorn is a dinosaur!” inserts the other.

Proper improvisation requires a tune, and that tune is set by Scripture. Jesus doesn't tell one person something is evil and another person that it is good. But what he does recognize is that the truths of Scripture have to be applied in different ways. Sometimes a person needs an embrace, other times a rebuke, and still others a question they are left to ponder.

This is a reminder that truly loving people requires prudence. That's certainly apparent as you're raising children – you are often left with a choice between discipline and mercy. Doing one or the other all the time is not good for them. So you have to take what little wisdom you have and do your best to decide.

But more than that, it is a doubling down on the truth that ministry has to be about the people you're ministering to. You can't make these kinds of calls in a vacuum; you can only make them by listening to and seeing the person in front of you. Too often we act as if a given truth is right for any occasion, whether for us that truth is that “God is holy” or that “God is love.” But the reality is that God is both, and people need both, but that in any given moment they probably need one of them more. And the only way to decide is to pray for wisdom in a context of relationship and human interaction. Knowing people is the necessary first step to loving them.
Labels: Jesus Love