The Need for the Hereafter 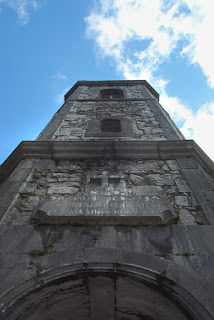 Wait for the LORD and keep his way,

and he will exalt you to inherit the land;
you will look on when the wicked are cut off.

I have seen a wicked, ruthless man,
spreading himself like a green laurel tree.
But he passed away, and behold, he was no more;
though I sought him, he could not be found.

Mark the blameless and behold the upright,
for there is a future for the man of peace.
But transgressors shall be altogether destroyed;
the future of the wicked shall be cut off.
(Psalm 37:34-38 ESV)

One of the ideas that has become popular among certain circles is that the Christian doctrine of eternity serves as a means of enabling injustice in the present. This was Marx's famous "opiate of the masses" - that promises of rewards in heaven somehow serve to prop up tyranny on earth.

There is an intuitive sense to such an argument. There have been kings and leaders who promise that those who follow them will be rewarded in the hereafter. Soldiers asked to die to prop up worldly power and citizens asked to surrender their posessions for a promise of repayment in the afterlife. Let's grant that can happen.

But, as the 37th Psalm argues, the opposite is also true. As much as misapplied hopes of heaven can result in evil, a proper hope of eternity is also necessary for lasting good. As the psalmist would put it, "there is a future for the man of peace."

We live in an age obsessed with the present. It is consumed by short-term earnings and immediate rewards. This makes it deeply challenging to pursue righteousness because, in the short term, it is often the wicked who prosper. They sow fear and gain followers. They seek their comfort and seem to achieve it. They reap riches while others suffer.

Why pursue truth? Why seek selflessness and kindness and peace, when those who do otherwise "spread themselves like a green laurel tree?" While part of the answer might be that this is the "right thing to do," that can't ultimately sustain us. We need some hope that a life of love and goodness will ultimately be a life worth living.


If heaven is co-opted by kings great evil can result, but true heaven is beyond the realm of any king, and those whose citizenship is there are thus ultimately beyond his ability to control.

This is what eternity provides for Christianity, and the reason we need it. The call to righteousness cannot promise us out best lives now, but it does promise us a future worth pursuing. A future beyond the schemes and terrors of this world.

This was part of why early Christianity was so revolutionary. It had an ultimate hope that transformed present life, an ultimate hope that the powers of the surrounding world couldn't touch. If heaven is co-opted by kings great evil can result, but true heaven is beyond the realm of any king, and those whose citizenship is there are thus ultimately beyond his ability to control.

Our calling is to live for that sort of kingdom of heaven. In an age where we are constantly being invited to take sides, to seek influence, and to live in fear, the psalmist calls to us: "Refrain from anger, and forsake wrath! Fret not yourself; it tends only to evil." (Psalm 37:8 ESV) We do this not because it might not mean suffering and loss in the present, but because our ultimate hope is not the present. Rather, it is that:
In just a little while, the wicked will be no more;
though you look carefully at his place, he will not be there.
But the meek shall inherit the land
and delight themselves in abundant peace. (Psalm 37:9-11 ESV)
Let us live with eyes fixed on that hope.
Labels: Eternity Psalms