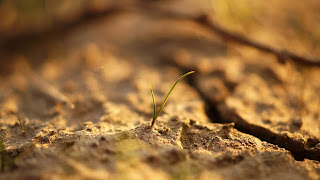 As a pastor, one of the things I get to do is walk couples through the process of premarital counseling. One of the things I tell them in the first session is that, in a sense, marriage is not about the good times but the bad. Of course, the vows they take in marriage apply all the time. However, we don't need the constraining power of those promises in the "better," "richer" and "health" moments. They come into their own when we are at our worst, when poverty and sickness and sin rear their heads. We don't need marriage because we love each other. We need marriage because sometimes we don't and because this crooked world will do everything in its power to destroy what love we manage.

Friday is Elizabeth and my 11th anniversary - our third since her diagnosis with cancer, and the first since that diagnosis became terminal. As much as they are still sweet, anniversaries have become reminders to us of her condition. Old couples announcing their 50 or 60 years together used to be one of our favorite things. We would smile at each other and talk about the sweetness of growing old together. Of walks where we leaned into each other, each needing the others' strength to stay upright. Of familiar jokes and shared stories when our rough edges had, at last, rubbed against each other long enough to become smooth and polished. Now, we are forced to remember that we will probably never be those couples, or even come close. The implicit hope of such occasions – the “and many more” - has turned into a question. "How many more?"

As I reflect on that reality today – as we find our anniversary an occasion for both joy and grief – there are two thoughts that linger in my heart.


First, marriage is about the hard stuff. This is why I give those young couples that talk. Pain isn't some aberration; it is exactly what we signed up for. The whole point of our promises was to create a union that could endure the broken realities of life in our world.

I recognize in my own heart, faced with grief, the temptation to withdraw. To turn inward and detach in hopes that the pain might be somehow avoided. Yet while this posture is more pronounced in the last months and years, it isn't wholly new. That same temptation runs beneath the surface in every part of marriage – in every part of life.

To open your heart to someone always comes with risk. As C.S. Lewis put it, “To love at all is to be vulnerable. Love anything and your heart will be wrung and possibly broken.” Even more, love always comes with hurts. No person is so above sin and pettiness such that they won't at times wound and use you. That includes your spouse – as unromantic as it is on the eve of our anniversary to reflect on such thing, we have certainly both wronged each other in ways that have caused pain and tears.

The purpose of marriage is to create a union that can endure such loss and such sin. To make the commitment that we will still be there, still keep our hearts open to each other, no matter what we discover in the world or in our partner.

People in our world hear this and recoil. They immediately want to talk about the exceptions to that rule, and there are exceptions. There is a sort of desertion of those vows on the part of one partner that can result in the breach of that union for the other. Abandonment and abuse and adultery – there are hard realities Scripture recognizes that can demand an end to the marriage.

However, we often rush to those exceptions as a way to avoid the more important and fundamental truth – that we are committing ourselves to a union that will involve loss and sin and pain. While such desertions in their ultimate forms might breach a marriage, there are a thousand little desertions that do not. Little abandonments and abuses and adulteries of the heart that happen in every marriage. Putting ourselves or others ahead of our spouse, letting anger or bitterness result in cruel and regrettable words, choosing selfishness or passivity over serving the other person. These little evils exist in every human relationship. Marriage is a commitment to love in spite of those daily desertions, to remain even though the hurt us and we want to flee. Wendell Berry describes marriage like this:


“It is to be broken. It is to be
torn open. It is not to be
reached and come to rest in
ever. I turn against you,
I break from you, I turn to you.
We hurt, and are hurt,
and have each other for healing.
It is healing. It is never whole.”

This is what we signed up for. That is the first thing I reflect on as I think about the pain this anniversary brings. My heart will be broken, and that I have committed myself in our vows to remain open to such hurt.

Yet for all that – and I know it might seem a grim rumination for an anniversary – marriage is also worth it. More than worth it. We must commit ourselves to the hard things because, without that commitment, we cannot experience the beauty.

In the first place, there is a general rule of life I have become convinced of: our openness to grief is equal to our openness to joy. The capacity to feel one is directly tied to our capacity to feel the other. I have watched people seek to remove their capacity to be hurt, but it doesn't leave them happy. It simply leaves them guarded and brittle. Medicated. Floating in a haze of diversion and mediocrity. You cannot enjoy a sunset without confronting the darkness that comes in its wake. You cannot treasure a child without knowing they might one day reject you. You cannot laugh the deep laughter of freedom without also weeping the tears of loss.

This is especially true in marriage. On the one hand, it is the reason couples who draw back from each other often lose their capacity to appreciate the other. They start by closing themselves off from the ugly things in their partner, but it leads to an inability to see the wonderful things as well. At the same time, it is also the reason couples that lean into each other despite the suffering are often those who take the most pleasure in each other and find the most fulfillment. "We hurt, and are hurt," but also "we have each other for healing."

More than just our capacities for joy and sadness being mutual, though, the beauty of love is that the commitment it makes has the capacity to create greater joys than we can imagine. That somehow at the far end of the struggle is a closeness and an intimacy that can only be forged by weathering the pain. The green of the hills and the colors of the rainbow are actually watered by the storms that precede them. We commit ourselves to each other through the sickness and the worst because it produces something far better than we could without them.

In my ministry, I have the great privilege of being allowed into peoples' stories. One of the things that surprised me, at first, was how many of the marriages I admired and respected in older couples involved stories with enormous heartache or sin. Couples who now loved and helped each other, who I regarded as inseparable and inspirational - many of them had arrived at that place only after seasons of immense hardship. Sometimes external, walking through tragedies that nearly destroyed them. Sometimes internal, having to confront significant sin in the other person and seek to forgive it. The more of these stories I hear, the more I realize that perhaps the marriages I now admired are only what they are because of that process of suffering. Somehow it broke them in ways that, when healed, produced the shapes that now fit together so well.

Of course, there must be a mutuality in this if the beauty is to appear. One of the tragedies in some marriages is how one spouse seeks to be open in these ways while the other walls themselves off. There is no power in a person's love that can melt the hard heart of another. But even in such sad situations, the story is not over. I suspect this is what the Apostle Paul has in mind when he tells us, "Love bears all things, believes all things, hopes all things, endures all things." (1 Corinthians 13:7) Love continues to remain open even to such a person in the hope that perhaps someday they will open themselves as well. Because, while not always, sometimes they do.

All of which brings me to Elizabeth and to our present reality. It is painful, and I would never wish the truths we are confronting on anyone. It is brutal. Yet there are beauties I know we would not have experienced without the pain. We have held each other and looked at each other and seen things through the tears, somehow, more clearly than when our eyes were dry. I have discovered things in her and in myself and in God these last months and years which, while I might have named them before, I had never truly known.

None of which means I don't in other moments rage against Providence. None of which means I am healed of the hurts. But the hurting and the rejoicing go hand in hand for us, and so we go on, hand in hand, for however long cancer and the Lord give us. This is what we signed up for, it is what we were made for, and it is what is remaking us each day into something I cannot grasp but trust is good. It is bitter, and it is beautiful. It is love.
Labels: Cancer