Fences and Direction in Christian Obedience. 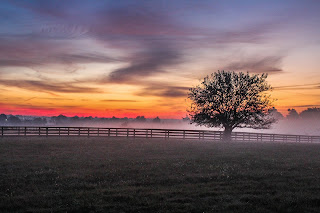 As Christians, we are called to obey God's commands. Obedience is not the grounds for entry into Christianity - that is faith alone in Jesus's work of grace. Neither is it something we will fully realize in the Christian life. However, we as Christians are called to seek to become like Christ, and the moral vision of Scripture is meant to teach us how to do this.

Christian obedience is not just a set of rules. There are those who mistakenly treat it this way, acting as if they can fulfill some basic morality checklist and be in the clear. Such people have made a profound misunderstanding, one Jesus would very much rebuke.

At the same time, this doesn't mean there aren't rules within Christian obedience. Others err in this direction. They cite the "law of love" and a few other general principles and then feel free to ignore all the things Scripture says about the particulars of life. This is equally problematic.

The root problem in both cases is that they pose an either/or. Either rules are the sum of Christian ethics or they don't matter at all. The truth is more complex. The best way to think about how the Bible discusses God's commands is with two images: a fence and a direction.


"You have heard that it was said... But I say to you...." That is the formula that runs through a significant part of the Sermon on the Mount, the famous discourse of Jesus on life in His kingdom (Matthew 5:21-48) Many read these words and see Jesus as somehow overturning the Old Testament regulations he comments on, but nothing is further from the case. When Jesus contrasts the prohibition against murder with his command to not harbor anger, He isn't saying murder is somehow okay. The same is true of adultery and lust. In other cases it is a misapplication of the law He seems to be challenging. In the Old Testament an "eye for an eye" is put forward as the maximum allowable retribution; in Jesus's day, it seems to have become the minimum acceptable one.

What lies behind Jesus's treatment of the law is not an overturning but rather a heightening. Jesus's issue is not with the commandments but with how they are being used. People read, "Do not murder," and say, "Alright, that's the pinnacle of obedience. As long as I don't kill people, it doesn't matter how I treat them." Jesus is arguing that, while we shouldn't go about murdering people, our goal in righteousness should be higher.

Here is where those aforementioned pictures come in. As we read Scripture's discussions of righteousness, we need to recognize that sometimes it is talking in terms of a fence and, at other times, it is calling us to a direction. One erects a barrier and says "never cross this;" the other points away from the fence toward the endless fields beyond and says "run in that direction." Both are important, but we shouldn't confuse one with the other.

Within the Old Testament, the fence parts of the law were what enforced the boundaries of Israelite society. If you stepped beyond this fence, if you broke these commandments, you were removed from the fellowship. However, that doesn't mean they were the sum of what you should be seeking. Remember, when Jesus says the law is summed up in the commands to love God and love neighbor, He is quoting the Old Testament. Perfect love has always been the direction we are meant to be pursuing.

Nothing about this changes in the New Testament. The moral fences are still in place, even if the ceremonial elements of the Old Testament have been fulfilled. Murder and adultery and theft and idolatry are all still off limits. Because of the hopefulness about real victories found in the resurrection and coming of the Spirit, the direction is emphasized more, but that hasn't changed either. It is still the same calling of perfect love, bounded by the same fences of minimal obedience.

Let me suggest two situations where I think this distinction is really helpful.

If we view the fences as the sum of the law, as the moral checklister does, we will try to skirt through life doing the least possible good. This is the spirit of the teenager who wants to know "how far is too far," as if what we are called to is simply technically avoiding intercourse rather than treating others with absolute respect and purity. It is likewise the spirit of many of us when it comes to loving our neighbors. We want to ask, "Well, what's the bare minimum I can do and still count as loving them?" Our response to such legalism should be to point toward the horizon and say, "Stop leaning on the fence and get going."

At the same time, if we ignore the fences, we are prone to lose sight of God's definition of righteousness. If we live only in terms of nebulous concepts like love, we can easily let the world distort what they mean. History is full of regimes who have justified the killing of millions in the name of "what is good for our neighbors" or "what is loving to God." We need the fences to show such warped thinking for what it is. This means that, while we ought to show love and grace in all things, the culturally challenging teachings of Scripture in our day on things like sexuality or generosity or rest are very much still fences we are called to observe. If our definition of love entails hopping over God's barriers, we are headed in the wrong direction, even if we don't recognize that fact.

Keeping these two realities about God's commands together help us get a full-orbed sense of how Scripture treats obedience. There are rules Christians are called to follow, but to mistake Christian morality for merely the rules is to miss the thrust of the whole of Scripture. However, to thereby assume we don't need the rules is like a driver who insists on being courteous and careful but doesn't bother to stay on the road. Obedience is much more than just brute commandments, but it is never less.
Labels: Obedience