Living with the Shields Down 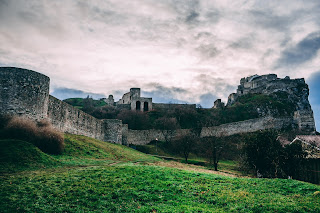 “Finally, all of you, be like-minded, be sympathetic, love one another, be compassionate and humble. Do not repay evil with evil or insult with insult. On the contrary, repay evil with blessing, because to this you were called so that you may inherit a blessing.” (1 Peter 3:8-9)

It was a feature of Star Trek, that formative mythology that shaped my youth: something strange or abnormal would happen, a ship would approach without responding to comms or an unthinkable alien would be floating through space, and the captain would give the order. “Raise shields. Deflectors up.” With those innocuous words, you knew everything was about to explode.

I sometimes imagine that moment as I watch people living in conflict. For a couple whose marriage has become a battleground, for old friends now doing their best to destroy each other, or for the warring factions in our modern culture, as I listen to their bickering and sniping and self-justifications, I can almost imagine the invisible forcefields flaring in the space between them.

One of the great myths that perpetuate conflicts of all sorts is that we are “only” defending ourselves. This is the perennial explanation, whether we're talking about spouses or neighbors or political rivals. "They are the ones hurting us," we say. "They are the ones on the offensive. We're just trying to protect our interests." The problem is that what looks like defense to us is in fact offensive to the other party. Our means of protection are the things that cause the wounds driving the conflict.

Consider a marriage. When someone is hurt, their first instinct is to withdraw and raise those invisible barriers. As much as that is understandable, it is also hurtful to the other. Separation, even emotional separation, leaves a sucking wound in its place. The only response seems to be for them to withdraw as well, and now the original person playing defense feels the injury of abandonment, driving them further away. Over time, the defensive becomes ever-more-damaging. They put barbed spikes poisoned with spite on their walls and ready the weapons when their spouse approaches. Forays from each party attempting to make peace are met with scornful arrows. Things spiral down to a state of mutually assured destruction: both parties watching the other, their finger on the button, ready to rain down annihilation.

The key thing to recognize about such a downward spiral is that it is fueled not by hatred of the other person but by a fear for ourselves. We see the other ship raise shields, and so we do the same. We circle. We fire warning shots across their bow. Eventually, we resort to preemptive strikes until all that is left of debris. All of this born not out of a desire to destroy but simply a prudent posture of looking out for number one. We don't want to destroy the other person, at least not at first. We just want to protect ourselves. Relationships are torn apart by the tragic rationality of self-interest. 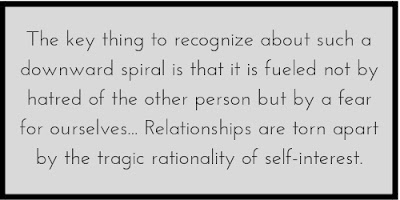 Living with the Shields Down
The posture the New Testament demands that we live with our shields down. It calls us not only to not attack others but to go further. What Peter forbids is reciprocity, which is a strategy of self-defense. “I will only do to you in response to what you do to me,” we might say, thinking that puts us on safe moral footing. Peter's response would be, “Do not repay evil with evil... On the contrary, repay evil with blessing.” We are to seek to do good to those who would try to harm us, even though that opens us up to harm. We are called to look at our enemies and say, truly meaning it, “God bless you, brother,” and then do our best to make that statement come true. If I could riff on Jesus's calling in Matthew 5: “If your enemy would seek to shoot you, offer to help him pick out the gun.”

Such a calling sounds preposterous to us. It sounds impossible. In just a moment I want us to discuss how Scripture can call us to this, how in the world we are enabled to live out such a calling. However, first, I want to stress why it is so necessary.

To reiterate what we have already said: most of the problems in our world result not from mustache-twirling malevolence but rather from a posture that says, “Love your friends; repay your enemies.” People bemoan the political tribalism of our world, but how much of that division is simply a result of this ethos? We look out for the people on our side, compassionately overlooking their faults and championing their strengths. At the same time, we erect walls to protect us from the people on the other side. Consider the wide reach of the meme and the sound byte, forms of discourse aimed not at political persuasion but rather political fortification. They aren't there to change the mind of the other side; they simply exist to remind us of how right we are and how important it is to keep our shields raised.

Crucially, I am not arguing that this will necessarily result in peace. There is a reason Paul frames his version of this calling as, “If it is possible, as far as it depends on you, live at peace with everyone.” (Romans 12:18) There will be times when we lower our shields and the response of others is to launch a full broadside. After all, they have been trained by the world to suspect any such opening is a trick or a mistake that must be taken advantage of. We will discuss how to deal with that below. What I am saying, though, is that as long as we live with our defenses up, peace will be impossible. Lowering our shields might result in wounding, but it also opens the possibility for reconciliation. 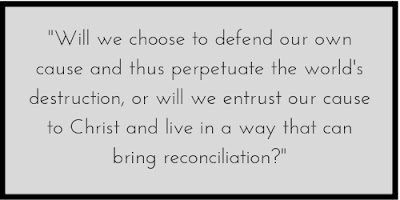 The Means of Peace
So this calling is necessary, but it is also difficult. That is where we must take two other truths Peter highlights in this chapter as our guide.

The first is the suffering of Christ. “For it is better, if it is God’s will, to suffer for doing good than for doing evil. For Christ also suffered once for sins, the righteous for the unrighteous, to bring you to God. He was put to death in the body but made alive in the Spirit.” (1 Peter 3:17-18) Jesus stands as the ultimate example of someone refusing the posture of self-defense. In the garden, as He is arrested, Jesus tells Peter to put away his sword. “After all,” he says, “I could call down legions of angels to annihilate my enemies.” (Matthew 26:52-53) The point Jesus makes throughout his crucifixion is simple: “I could defend myself. I am choosing not to.”

When we suffer, inasmuch as it is for doing good and seeking peace, that suffering is actually joined to the suffering of Christ. It is not meaningless or unfair but is rather a participation in His dying, a way we are embodying His work in our lives. Our willingness to live with our defenses lowered is in truth our willingness to partake of the cross of Jesus, and thus to also partake of His blessing. Joining Christ in His death is also to join Him in His resurrection. Or, as verse 9 of the text puts it, “repay evil with blessing, because to this you were called so that you may inherit a blessing.”

Growing from this last point, we are also enabled to live with our shields down by the certainty of God's promises. Peter proclaims that baptism, as an acting out of Christ's death, “saves you by the resurrection of Jesus Christ, who has gone into heaven and is at God’s right hand—with angels, authorities and powers in submission to him.” (1 Peter 3:21-22) This speaks to us of the inheritance we share with Christ, the same one mentioned earlier in the passage – our inheritance is in God's coming kingdom of Heaven, and no amount of suffering can take that away. It also speaks the grounds of that inheritance – that Jesus who suffered is the one sovereign over all things now, and that He will safeguard us by His power until we are welcomed into that rest.

The choice that confronts us is this: will we choose to defend our own cause and thus perpetuate the world's destruction, or will we entrust our cause to Christ and live in a way that can bring reconciliation? Jesus will look out for us; not in a way that means we won't suffer for doing good and seeking peace, but in a way that will fill suffering with both the possibility of restored relationship and the certainty of eternal blessing. Our calling is to join Him in the posture of the cross, filled with the hope of resurrection.
Labels: Culture Obedience Politics