The Problem With "Speaking the Truth in Love" 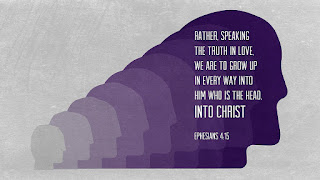 It is common when Christians discuss what we communicate to the world to hear the maxim "speak the truth in love." (from Ephesians 4:15) There is a sense that there are two distinct impulses pulling us in opposite directions: to tell people the truth and to love them. I think this is unhelpful and wrong; let me suggest two reasons why.

First, like many proof texts, this one fails to reflect what Scripture means by those words. In the context of Ephesians 4, "speaking the truth" is about the task of discipleship and training of Christians and "in love" means "in the bonds of love that unite the church," as the phrase's repetition in the next verse makes clear. That passage has nothing to do with how we communicate ideas to the world but rather what elements are necessary for spiritual maturity.

Second, this paradigm assumes distorted meanings for both words. "Speaking the truth," on these terms, is a task that is necessarily unloving. The posture of truth-telling is made to sound necessarily meanspirited and harsh. "Love," likewise, ends up as synonymous with permissive cowardice. If we don't correct our impulse to love, it apparently will lead us to lie to people. Neither of these usages fit with what the words "truth" and "love" mean in the rest of Scripture.

Instead, let me offer a different paradigm, one that I find more helpful in parsing breakdowns in Christian communication. It gets at the two sides of what "truth in love" is trying to say without falling prey to the ambiguity. That discussion consists of two pieces: as Christians, we are to speak the whole truth and do it in a manner that fits its content. It is our failure to fulfill these obligations that result in failures of faith.

SPEAKING THE WHOLE TRUTH
Let's start with the idea of truth-telling. We can distinguish different sorts of truths in terms of the potential challenge they contain. Many truths, including plenty of Christian ones, aren't necessarily challenging to anyone. People have dignity. Murder is wrong. There might be times that individuals struggle with the application of these facts, but almost nobody will be offended when someone states them. 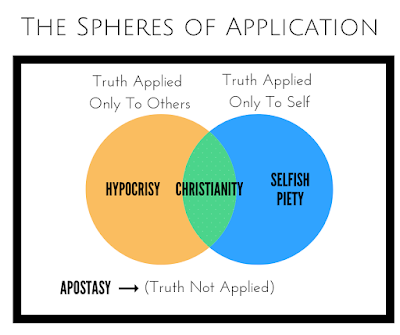 Divided up this way, we can begin to parse a number of different failures in truth-telling. There is, first of all, the sin of apostasy. It can be tempting to simply cut out all of the challenging bits from our faith the way Jefferson took scissors to his Bible. I won't say more about that impulse in what follows because, if it is indulged, there are much deeper problems than the character of our speech. We have stopped trying to communicate Christianity anymore, instead embracing some religion in which we have pasted our favorite bits of ourselves on the clouds and fallen prostrate before them.

Hypocrisy is the sin of eagerly proclaiming truths that apply to others while failing to speak those that challenge us. This can manifest in many ways. It is the failure of the preacher who rails against the excesses of culture while ignoring the greed, lust, gossip and cruelty of his sheep. It is likewise the common-among-Christians tendendy to pick and choose among evils, condemning sins we find relatively easy to avoid while excusing those that hold our hearts captive. Much of the harm done in the name of Christian truth-telling is really a manifestation of hypocrisy. The eager harshness of moralistic demagogues can only exist in a universe where God's judgment is not something we are equally worthy of.

While less common, there is an opposite error of selfish piety that can manifest as well. The attitude of some is to simply let the world burn while worrying only about personal righteousness. For others, there is such an aversion to conflict or fear of men that, while they will pursue a hard calling to obedience in their lives, they stay mute in regard to the lives of others. While such a posture might appear pious, it is always a lie. Personal righteousness demands concern for our neighbors and personal holiness requires us to move in love toward the world. When Jesus calls us to "take up our cross and follow," that is particularly a calling to public faithfulness with the shame and persecution it sometimes brings.

Christianity, in opposition to these errors, rests on a commitment to the whole truth. We are to "stand firm with the belt of truth buckled around [our] waist." (Ephesians 6:14) True worship requires that we do it "in truth." (John 4:24) We are called to love "in truth." (1 John 3:18) Importantly, though, this means both those truths that challenge the world and those truths that are inconvenient for us. To fail to communicate this wholeness is in fact to lie - he half-truth is the greatest blade in the deceiver's arsenal.

It is incumbent upon us as Christians to tell the whole truth about what God says. This includes some ideas that will be challenging or offensive to the world, calling evil things that it calls good. It also includes many ideas that will be challenging to us, making manifest that we are deeply evil ourselves. Our tendency is to downplay one or both of these realities.

These distinctions show why putting truth and love in opposition is unhelpful. Often what is considered "truth without love" is really just transparent hypocrisy, while what is considered "love without truth" is dressed-up apostasy. The problem in both cases is actually failing to tell the whole truth. Faithfulness requires us to acknowledge that we must name sin as sin, but do so in such a way that the mantle of "sinner" lands as squarely on our shoulders as on anyone else's.

IN A FITTING MANNER
While the above is important, it doesn't exhaust the topic. There is a second piece that needs to be added - that we should also speak the truth in a manner that fits what we're saying.

While "speak the truth in love" is not actually a biblical paradigm about communicating with the world, we do find one in Colossians 4: "Walk in wisdom toward outsiders, making the best use of the time. Let your speech always be gracious, seasoned with salt, so that you may know how you ought to answer each person." (Colossians 4:5-6) Here we see two commandments: our speech should be "gracious" and also "seasoned with salt" (i.e. challenging truth). Notice that, unlike the Ephesians 4 approach, these two ideas aren't placed in tension but are seen as natural complements. Graciousness and truthfulness belong together like flour and salt, each in their proper measure.

Why is this? Because the message of Christianity, while containing hard and provocative truths, is fundamentally gracious. The reason Scripture challenges us all so deeply with its talk of sin is that only then can we begin to appreciate the salvation worked for us by Jesus Christ. The grimness of the law is necessary because only by appreciating such a diagnosis can we swallow the hard medicine of the cure. Yet the cure is always the point - we are all of us deeply sinful; we are all of us saved by grace.

If Christianity is gracious, that reality must also dictate our posture as we speak. We cannot do so ungraciously, because that would lend a lie to our words. Humility, gentleness, patience and a winsome sense of our own frailty should all characterize how we live in the world. None of these preclude telling the whole truth; they actually make it more true. To call someone a sinner with a pointed finger is to deny the universality of our sin and the gracious foundation of our salvation. To share the same truth with a sad smile and an arm around the shoulder is to more clearly explain our condition.

Here is where that rubber meets the road. I remember watching an angry street preacher get in a fight with a girl who was clearly a Christian. She accused him of failing to "speak the truth in love"; his response was "there is nothing more loving than the truth." The problem for both of them was that neither was willing to recognize the real issue: not that the street preacher was too engaged in truth-telling but that he was not telling enough of it. Both the content of his message and the manner in which he shouted it failed to communicate the fullness of the truth: that sin is a disease we all share, judgment is a consequence we all still deserve even on our best days, but that God loves to save such sinners and work in evil people like us the beginnings of life and Christlikeness. Truth and love do not exist in opposition but are united in the grace of our Lord Jesus Christ.
Labels: Apologetics Grace