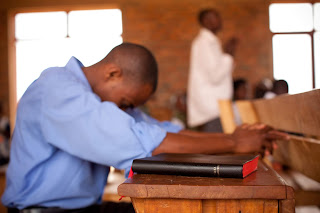 One of our central tasks as Christians is to worship the Lord. While what happens on Sunday mornings when we gather in worship is not the sum of that task, it is the foundation for the rest of our worship. What we do when we are gathered shapes and strengthens what we do when we are scattered.

While I've written about worship before in a narrow sense, I hope in this and the following post to zoom out and discuss some often-neglected big-picture questions. As a pastor, it is common for me to be exposed to arguments over specific topics - "What kind of music?" "What structure of liturgy?" It is much rarer to hear folks engage with the actual theological and practical questions that lie behind these arguments. However, as I watch how people engage with the specifics, I can't help but feel frustrated by both sides because of their lack of care for such ideas. Today I want to spend some time laying out one of the core theological doctrines that should shape how we approach worship. In particular, we're going to do that by examining what theologians call the regulative principle of worship. In a few days, I'm going to follow it up with a post about several often-ignored practical concerns.

One of the distinctive doctrines of the Protestant Reformation, the regulative principle is perhaps most simply stated in the Westminster Confession of Faith: "But the acceptable way of worshiping the true God is instituted by himself, and so limited by his own revealed will, that he may not be worshiped according to the imaginations and devices of men, or the suggestions of Satan, under any visible representation, or any other way not prescribed in the Holy Scripture." (WCF 21.1) While the English there might sound archaic, the underlying argument is simple. Each thing we do in worship must be: 1) "instituted by God," i.e. directly commanded in Scripture as a part of what we are supposed to do, and 2) limited by His own revealed will, such that the boundaries defining how we do them are established in Scripture.

We should note that this idea is not original to the Reformers. Scripture itself from the beginning insists that it is not just wrong to worship false gods; it is also evil to worship the true God in ways He hasn't commanded. Moses warns Israel against just such a practice when they enter the promised land. "[A]fter they have been destroyed before you, be careful not to be ensnared by inquiring about their gods, saying, “How do these nations serve their gods? We will do the same.” You must not worship the Lord your God in their way, because in worshiping their gods, they do all kinds of detestable things the Lord hates." (Deuteronomy 12:30-31a) Israel will be exposed to all sorts of other approaches to worship; God tells them all such approaches except those He has already commanded are off limits. Jesus likewise repeatedly condemns the Pharisees for adding manmade traditions to the worship of God: "They worship me in vain; their teachings are merely human rules." (Matthew 15:9) Paul condemns as worldly any addition to the Christian religion which, though they have "an appearance of wisdom, with their self-imposed worship, their false humility and their harsh treatment of the body," are in truth "merely human commands and teachings." (Colossians 2:22-23) Scripture from start to finish warns against the idea that our inventiveness should have free reign in how we structure our public and private worship.


"Scripture from start to finish warns against the idea that our inventiveness should have free reign in how we structure our public and private worship."

With that definition established, we need to discuss what the regulative principle means. To do that, though, we first need to define what it doesn't mean. Up front, it is necessary to point out that one of the issues is that most of the people who actually talk about it often don't understand it. There are a number of small Protestant denominations which do insist upon the "regulative principle" and mean by it "exactly what we do and nothing else." The problem with this approach is that there is an enormous breadth of practice that can fall within the regulative principle.

To see that breadth, let's first get specific. The first thing the principle says is that true worship consists of (and only of) the elements of a worship service which God institutes and commands. Within the Westminster Confession, this is put forward as a list: prayer (with thanksgiving), the reading of the Scriptures, the hearing and preaching of the Word, singing of songs, celebrating the sacraments of baptism and the Lord's Supper, and special seasons of fasting and thanksgiving. (WCF 21.5) So the argument of the regulative principle is that we should be able to look at everything we do in worship and say, "Here is which of those biblical elements this thing is."

The second thing the regulative principle teaches is that each of these elements must be done in obedience to Scripture. For the Reformers, for instance, this is why prayers should not be offered to saints or angels or beings other than God. The sacraments were to be done in a way that honored their biblical form; for example, baptism must be with water in the name of the Father, Son, and Spirit. The same is true for each element: it must be done in a way that is faithful to what Scripture teaches about it, both negatively and positively.

Even a brief reflection on those lists should make us realize what they do not say. They do not say how we should order our worship services. They do not say how often we should pray, or how to divide up those times of prayer. They don't say whether elements should be pre-written or extemporaneous. They don't say anything about what instruments belong (or don't belong) in worship or what specific songs we have to sing (beyond their general character as biblical and God-glorifying) or how people should dress or whether to use projectors or any of the dozens of other issues people often debate. Indeed, one of the implications of the regulative principle in its original theological context was that it was unlawful for the church to bind people beyond its scope. Jesus alone is Lord of the conscience, and if the above defines the limits of what Scripture requires, we have no business robbing brothers and sisters of their freedom within those God-given limits.

One of the two frustrations I mentioned at the beginning is that, for those who argue for this principle, the freedom it contains is almost never acknowledged. It is treated not as a regulative principle but as a regulative conclusion. To appeal to it should be the beginning of a conversation - "Can you explain how this activity is justified?" - rather than a conclusion.

However, the other frustration goes in the other direction. That group that is over-invested in the regulative principle is tiny compared to the group that doesn't think about it at all. While there is a general sense that we should "be biblical" in how we worship God, most modern evangelicals have little interest in what that means beyond the extremes of things like praying to golden calves (and sometimes not even that.)

There are two great dangers when we disregard the regulative principle. The first, while it isn't the sort of idea modern evangelicals spend much time reflecting on, is that it can actually make our worship displeasing to God. This is a hard pill to swallow, in our day but also in the days of the Reformation. Consider the pastoral reflection of John Calvin:

"I know how difficult it is to persuade the world that God disapproves of all modes of worship not expressly sanctioned by His Word. The opposite persuasion which cleaves to them, being seated, as it were, in their very bones and marrow, is, that whatever they do has in itself a sufficient sanction, provided it exhibits some kind of zeal for the honor of God. But since God not only regards as fruitless, but also plainly abominates, whatever we undertake from zeal to His worship, if at variance with His command, what do we gain by a contrary course? The words of God are clear and distinct, 'Obedience is better than sacrifice.' 'In vain do they worship me, teaching for doctrines the commandments of men.'" (John Calvin, The Necessity of Reforming the Church)

While we are about to discuss a practical concern, this should be where we begin. Even if there weren't practical problems that resulted, we should heed Scripture's cautions against worshipping God in vain.

That said, the second issue that arises from ignoring the regulative principle is that it almost always leads to neglect of the true means of grace. Worship as God commands it is centered around the things that He appoints for our growth and nourishment as Christians - prayer, Scripture, and the sacraments. The danger with adding something else to the mix is that the new thing inevitably draws us away from those God-given blessings. We start believing something more is necessary. Indeed, that is often how innovations in worship are pitched. We become less diligent about doing those old activities faithfully and well, and as a result, we are spiritually malnourished. In such a starving state, though, rather than returning to the wells from which we can draw life, we become only more eager to find some innovation to turn things around. Most Christians, while eagerly seeking some "spiritual secret" to help their faith, have never really committed themselves to the spiritual secrets God appoints in our worship of Him. Those things - diligence in prayer, a deep life in the Word, and regular coming to the Lord's table - are where true life will be found.

So for those who have never considered the regulative principle, let me suggest a few diagnostic questions:


Of course, answering these questions is often not easy. They require us to dig deep in both Scripture and in reflection about what we do. They also raise a host of practical questions, which I hope to answer in the next post. That said, it is God we are worshipping. Coming before Him without such diligent reflection is a failure to appreciate the greatness of His Name.
Labels: Worship