This is a follow-up to a post I wrote two weeks ago about how churches approach worship. The aim of both posts is to discuss some often-overlooked background ideas that are important to the discussion. The last post looked at theological underpinnings; this week I want to consider some questions that are more practical, although not necessarily less theological. 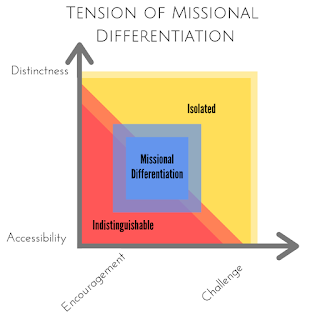 Let me introduce a chart that tries to organize the thoughts that follow. It consists of two axes, one about the practical choices we make in worship in terms of how they are experienced by a newcomer and the other in terms of how people experience the actual content - does it leave them feeling encouraged or challenged? My contention is that many of our failures to worship well in practice come from failing to appreciate the necessity of keeping these different priorities in tension with each other, resulting in a failure to have what I will be calling "missional differentiation," a term I will define below.

First, in terms of how easy worship is to experience, I'm defining the concerns at the ends of the spectrum as "accessibility" and "distinctiveness."

On the one hand, we want to be accessible. We want people to be able to move into worship in a way that makes sense to them and connects with where they are. This is a good concern, coming from a desire for evangelism and for welcoming in Christians of various traditions and backgrounds. However, taken to an extreme, it obviously becomes problematic. Christianity will inevitably involve a large number of activities and concepts foreign to the outside world. Even something as simple as singing praise to the Lord is radically outside the normal secular experience. The same is true for things like prayer and the reading of Scripture. Likewise, to remove every alien word and idea from the Christian gospel will necessitate abandoning concepts like Jesus Christ, sin, and the cross. To be perfectly accessible to a secular world will mean we are nothing more than a mirror of the secular world; faithfulness will always require some amount of distinctiveness, and indeed that is part of what attracts people to Christianity in the first place.

That said, we can also become so distinct as to be incomprehensible. Perhaps the most extreme version of such an experience was the one I had as a young person when I, out of curiosity, attended both Latin masses and a service at a Spanish-speaking Pentecostal church. It was impossible to join in on the service because I literally could not understand what was happening. While not to this same extent, churches veering far toward the distinctive end of the spectrum usually leave visitors baffled and uncomfortable. People stand and sit, recite lines from memory or spout terms like "expiation" and "substitutionary atonement" which might as well be Latin (and in some cases basically are). Such an experience might leave them bemused, but it will not draw them into worship and membership in the body of Christ.

The truth is that both concerns matter, and that healthy worship involves both. This can take two forms, both of which are valid. One is to consider whether to alter some of the forms themselves that we have received because they are unnecessarily alienating; the other is to maintain those forms but spend the time explaining what is happening. For instance, let's say a preacher is prone to throwing around unnecessarily dense theological terms. He might decide to stop using them; he might also continue but take great pains to consistently define what each of them means in a way someone new to the faith could understand. Indeed, as this example indicates, the best approach is usually to do some of both.

Of particular note on that point - the more distinctive a church's worship, the more effort they probably need to expend explaining things to make them accessible. A four-songs-and-a-talk seeker sensitive service probably needs no explanation (although it might be asked whether it is actually all that distinctive as well). A robust liturgy with responsive readings, gloria patres and creeds and confessions needs quite a bit, and many elements should be repeated over and over for those who are new.

A similar tension also exists between themes of encouragement and challenge. We might make these categories more theological. Some try to get at them while talking about truth and love, although I have written before about how unhelpful I find that dichotomy.  Others might refer to it in terms of "law" and "gospel," which are closer to the truth but nevertheless a bit misleading.

The basic idea is this. As Christians, we are called to encourage people. Part of our task is to sooth guilt with the balm of the cross, to comfort grief with the promises of God's care, and to provide inspiration to those who are weary. At the same time, we are also called to challenge them. Scripture points out to us our sin, exhorts us to pursue righteousness and calls us forward into the mission of God for the redemption of all things. Both of these themes belong together in healthy Christianity. Too much encouragement and we create happy pagans; too little and we leave behind broken spirits and despair.

In all of these categories, the key thing to recognize is that our problem is usually that we pick one or another of the priorities and make it absolute. We want to be a church that is welcoming and accessible to all, but without feeling the need for distinctiveness, we become charlatans and false teachers eager to tickle ears. Or we want to be a church that embraces the challenge of Christian obedience and we breed a congregation of Pharisees and hypocrites. Or we fail in some other direction.

Our ultimate problem is that we fail to recognize the place of the church in its role of missionary differentiation. Or, to use the Bible's categories, of being in the world but not of it, moving toward the world in love and grace while representing a way of living that is a challenge to all of its assumptions.

Practically in worship, this means that we both need to ask how we are stretching our people and how we are helping them handle the strain. We should be mindful of our biases and ask how we can correct for them. If we are all about being positive and welcoming, we should ask whether there is more substance and more history we can use to deepen peoples' walks with the Lord. If we are committed to being distinct and righteous, we should ponder how we can be like Jesus who went into the homes of sinners and outsiders and talked with them in ways that they could understand. The key is to not use one failure to excuse the other; all of us must be seeking to live in the place of tension as we seek together to grow in glorifying the Lord.
Labels: Worship