We Were the Villains 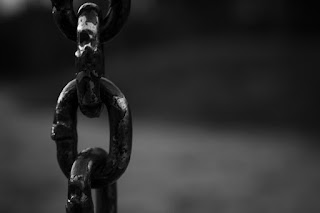 "Eighty-year-old J.E. Flow was a frequent contributor to the conservative Southern Presbyterian Journal... Now, at the height of the agitation in 1954 to merge his... southern Presbyterian church with the northern Presbyterian church (USA), he attempted to state a positive vision that would justify the separate existence of southern Presbyterianism... At the center of this vision were five commitments: the "old school" interpretation of Scripture and the Westminster Standards; the presbyterian form of church government; the grassroots principle of church oversight, symbolized in the role of diaconal care; the spiritual mission of the church; and 'the purity and integrity of the White man of North America upon whose shoulders are laid the burdens of the world.'"
-Sean Michael Lucas, For a Continuing Church p. 101

Today is Martin Luther King, Jr. day. It is a day where we reflect back on the civil rights movement and the hard work of many in fighting racism and prejudice in America. It is also a day when I find myself reflecting on a particular historical guilt that I am an heir to.

There are those who deride the idea of "white guilt," claiming they are their own persons and not culpable for the choices of those now dead (or at least much older). I suppose there is some complexity to that discussion, although I don't think those who protest are usually doing it out of a desire for philosophical nuance. However, where I think there is no question is that I and people in my part of Christianity share a certain Christian guilt when we think about racism in America.

The above quote is from Sean Lucas's history of the PCA, the large, conservative Presbyterian denomination where I was ordained. While I now serve in the smaller EPC, the underlying tension is the same in our history. I read though Flow's list of concerns and I nod my head. They are in many ways the concerns that drove conservative Presbyterianism to form itself as a separate body from the mainline. I'm reading and agreeing and then, suddenly, "Oh no. God, forgive us..."

When some of the first slaves were brought to Europe, arrayed on the beaches of Portugal to be inspected by the king, priests blessed the proceedings. The king gave a tithe of them to the church, for her to own and use "in God's service." The court recorder at the time spoke of the Christian "mercy" of the king in showing black men the kindness of being owned by good Christian folks.

When slavery came to America, it was Christians who provided the justification again. There was a deep, recurring sense many had that this was wrong. So they turned to Christian ministers and theologians to soothe their consciences. Not just worldly pseudo-Christians either, but those who in plenty of other ways championed biblical fidelity. They provided the justification.

If you make a list of the most influential Presbyterian theologians of the 1800s, two of the names at the very top would be Robert Lewis Dabney and James Henley Thornwell. When high school history books talk about southern theologians who defended chattel slavery, they are talking about Robert Lewis Dabney and James Henley Thornwell. They were, in their time, some of the most outspoken supporters of historic Reformed orthodoxy and of buying and selling and beating and owning human beings.

That is all a part of my history. Not just that some random people who happened to share my color of skin who lived hundreds of years ago did this things, but people who believed and championed many of the same causes I do. They were at the heart of theologically orthodox Christianity and at the heart of the push to defend racism.

Of course there were many theologically orthodox Christians who opposed it too. There were plenty of Presbyterians who opposed racism. It was one of the reasons the Presbyterian church split into northern and southern branches for a long stretch of its history. I'm grateful for that, and it is good, but it doesn't remove the stain. Many of our fathers in the faith participated in one of western Christianity's most grievous sins, and while there is grace in God, He does also visit the sins of the fathers on their children even to the third and fourth generation. And we aren't yet that far removed from it - indeed, many of those same sins continue today  using those same justifications.

That is my reflection for today. I suppose I could launch into practical applications, into calls for us to seek to repent of that legacy and pursue reconciliation. All of that would be true and needful, but instead, I want to suggest we just sit in it for a while and let it teach us a few things.

That heritage should make us sober about our own self-righteousness. I have read Dabney and Thornwell and some of those Christians in the '50s and '60s fighting against civil rights, and one of the most terrifying things is how sure they seem that they are on the side of the angels. They feel like they should be applauded for their good, traditional values. This should leave us fearful of feeling the same self-satisfied confidence in our correctness.

It should make us willing to listen quietly to those who would accuse us of being prone to those same sins. Because we are prone to them - we must be, given that history. Certainly that doesn't mean in every specific instance that you are guilty, but each of us should respond to it with sober self-examination. After all, it is in our theological and cultural blood.

Of course, it should also make us grateful to Jesus for the fact that the gospel is about restoring sinners. God works to forgive and heal all sorts of sins, and we can hope for that healing. We are neither doomed to walk the same paths as our ancestors nor to be cast out because of their guilt.