Marriage from the Other Side: The Steward and the Bridegroom 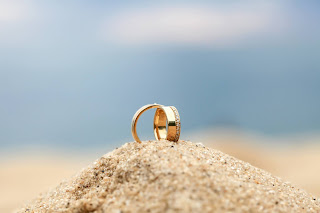 I’m reflecting in these posts on 13 years of marriage to my late wife Elizabeth from the far side. I talked about the best parts of marriage and about regrets, and then specifically reflected on sex and on kindness in it. In this final post, I want to zoom out and try to say why marriage mattered. Why it matters for any of us, and why those years mattered to me.

In dark moments of grief, one of the questions you can wonder is, “What was it for?” The conversations and compromises, the date nights and gifts, the shared stories and inside jokes… are they now meaningless? Was it all a waste?

In trying to offer comfort, that people often try to focus on the idea of legacy. On people we knew and ministered to. On our children. And all of that is true, to an extent. Marriage is meant to be a missionary partnership, an outpost of the kingdom of heaven on earth that shows God’s glory to the world and raises children and others to know and walk with Him.

Yet that also seems mercenary. There’s no mutual delight in it. Through the lens of legacy, marriage ends up resembling a spiritual business partnership. “Look at what we built!” There’s no poetry, no Song-of-Songs style celebration of the beloved. Which is why I want to suggest a different answer, one that I have found great comfort in as I think about our parting.

I grew up in farm country. I lived in a town of a few thousand people, which made me suspiciously urban to those actually doing the farming, but there were cornfields a block from my house in two directions. I have extended family that work in agriculture. I spent summers in detasseling and walking beans.

One of the things I learned, hearing some of those older farmers talk, was the idea of stewardship. Not from all of them—some took all they could from the land while the getting was good. But the best farmers, those worthy of respect, recognized that they were stewards of something that existed long before them and would last long after they were gone. The land was something they were given for a season, and their task was simply to leave it a little better than it was when they received it. To make it a little more beautiful, a little more fruitful, a little more alive.

That, it seems to me, is what marriage is ultimately about.

Human beings are eternal creatures. We lose sight of that from our present mortality-bounded perspective, but we will endure for countless millennia in the age to come. As C.S. Lewis famously put it, “There are no ordinary people. You have never talked to a mere mortal… [I]t is immortals whom we joke with, work with, marry, snub and exploit - immortal horrors or everlasting splendors.”

People are eternal, but marriage is not. On the stage of eternity, it is a fleeting encounter. In the age to come is neither marriage nor giving in marriage. That is true whether it lasts for thirteen years or for sixty. We will be joined and then we will be parted, and while in Christ we will know each other for endless billions years to come, we are only husband and wife for this brief span.

Which means that marriage is not the climax. It is not “forever,” despite what romantics tell us. Marriage is a stewardship, a life spent caring for a plot of land that will return to its owner one day and will be ours no longer.

The question we must ask, ultimately, is whether we have been good stewards of this immortal soul for the time of our unions. Whether we have left them more beautiful, more fruitful, more alive.

This way of thinking is powerful because it kills the selfishness that otherwise so easily creeps in. Our marriage was not for me. Nor was it for Elizabeth. We are both betrothed to God, and He will reclaim us from our earthly vows at the wedding supper of the Lamb. He is our true bridegroom, and we are to treat each other as people destined for eternal life with Him.

It is also powerful because it reminds us that, within the broader purpose of glorifying God, our calling is to help our beloved to become a more beautiful, more Christ-exalting person. We should build them up in the glory God placed in them, nurturing them and helping them to bloom. We should be seeking to always point them towards Jesus in all things, even when that makes them less effective at meeting our wants in this age.

If marriage is a stewardship, we must always be playing the long game. A farmer doesn’t “fix” a field in a single season. It takes care and patience and regular watering and much waiting. And at times, what changes is the farmer, not the land.

Yet if marriage is a stewardship, it is also infinitely worth doing. Because we have been entrusted by God with something of enduring value, and it is the greatest of privileges to care for it. Whether that something is a plot of His earth or a creature He formed from it.

This stewardship is the legacy we are ultimately called to seek in marriage. Not well-behaved children or a comfortable home or nice memories, although those might result from it. Our calling is not something we can even really see bear fruit in this life, except in glimpses. But on the glorious day when all things are revealed and the old is made new, when we meet again in resurrected gloriousness, my prayer is that I might know that just a little bit of that gloriousness was the result of how God used me in her life. In faithfulness and self-sacrifice and challenge and encouragement and shared joy; in the date nights and inside jokes and gifts and shared stories; in all of that, I was tending a field, blessing a betrothed woman, who has now gone to her true bridegroom. I pray that such might be the grounds for the Father’s merciful “well done.”

She certainly did such a work on me. She was a good steward of my heart. Imperfectly but faithfully. And though we will never be husband and wife again, that is a mark of love that endures.