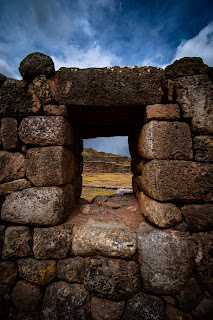 There is a lot of talk in our cultural moment about setting boundaries. It is a conversation I enter with a feeling of ambivalence. I strongly support setting healthy boundaries, but I also suspect the people who most need to do it are not while those most likely to abuse it are being encouraged to live like a four-year-old with an uncapped marker – that is, drawing lines everywhere, mostly where they don't belong.

Christian love does not preclude boundaries. All human relationships are meant to exist within limits. No person is God, and so no person has the right to demand unlimited access to another. No human being is owed unconditional support, unconditional allegiance, or unconditional service, especially when the demand for it leads to harm for the person involved or others they are called to care for. It is right and appropriate to oppose such idolatrous aspirations when we encounter them, and drawing a boundary is the best way to do it. "You don't get to speak that way. You don't get to demand that. You don't get to do that harm." Such lines are God-honoring, reflecting His ordering of creation and the person in question's true good. What a narcissist or abuser or other self-worshipper needs is not to be enabled but to be stopped in their oppression.

That said, I find myself increasingly uncomfortable with the way the language of boundaries is being used. The biblical idea of boundaries exists within an overarching call to love, and biblical love suffers all things, forgives all things, repays good for evil, and never seeks vengeance or selfish gain. That doesn't cancel the need to place limits on others if they are abusing relationships, but it does mean those limits cannot remove the call for us to die to ourselves and seek the good of others. Indeed, any boundary that is not in some way about the other person's good doesn't fit with the cross of Christ.

Let me try to make this tension concrete – let's talk about parent/child relationships. Such dynamics are certainly fraught. Every parent (and every child) sins in ways that hurt the other. What's more, there are plenty of times when this sin strains at the limits of appropriate relationship. Such line-crossing is obvious in situations like sexual or physical abuse. However, it also manifests in dynamics of codependence, manipulative control, or demands that attack other essential relationships like those of marriage or of a child's own children.

Such situations demand that a boundary be drawn. A child who, as an adult, continues to allow themselves to be abused or controlled by their parent is failing to love – it is unloving to their parent, who is being encouraged in sin, and unloving to the child's own spouse, children, and others who are being harmed by this relational overreach. It is an understandable failure, one wrought by the pain of their own malformed upbringing, but it doesn't change the destructive reality. Such a failure is giving material aid to idolatry, and on the altar of the parental idol the child's own kids and marriage and purpose and happiness will all be consumed.

At the same time, the boundary must be limited just like the relationship itself. Otherwise, it can easily cease to be love and become its own form of abusive control or punishment. Children are called to honor their parents. That command has limits, like all biblical commands, but it is the direction obedience normally takes. There are extreme situations where honoring God will lead to a full breach of parent/child relationship, especially in many of the aforementioned cases of sexual or physical abuse. The parent has at that point ceased to be a parent in any meaningful sense, violating the most sacred boundaries of life and body, and the child is simply acknowledging that reality when their relationship ends. But in most other situations, while boundaries should be drawn, honoring one's parents is still a binding call on children and we need to be thoughtful about what that means.

In our moment, as we overcorrect for a view of love that didn't place appropriate limits, I see many younger Christians losing any sense that such honor or other commands to love (say of our enemies) are in any meaningful sense still binding. Because someone is emotionally challenging or did something hurtful in the past or doesn't share all of our same conclusions about the world, we cut them off completely from relationship. We use the language of drawing a boundary to do it, but we are in fact going far beyond what an appropriate limit might be. We ought to treat illness; that doesn't mean we should always be amputating limbs. Yet too often I see such an extreme approach, and it doesn't fit with the posture of Christ.

Again, of course, all of this exists in tension. Boundaries are necessary, and some people need to get much better at drawing them. But I suspect many of us, myself included, are instead tempted to use boundaries as an excuse not to love. "Cutting that toxic person out of your life" can be a respectable way to dress up the less appealing "stopping caring for a hurting friend in need of support who can't really give back right now." It's easy to talk about loving your enemies after you've ghosted them and poisoned every relationship you share.

So how do you know where to draw the line? I can't offer a perfect road map, but here are the general directions I try to follow. In a hard relationship, I ask, "What is the point at which my heart starts to be unavoidably damaged? What is the point where bitterness or fear or anger becomes inescapable?" Not where it starts to get difficult – hard relationships are always hard. But at what point do I start losing my ability to function as a Christian toward the person and others. That is the place where the boundary needs to be drawn.

So, for instance, there are people with whom I will not have certain conversations. I know that they will become destructive to me or our relationship, and so I've simply said (and restated whenever necessary) that we aren't going to go there. Importantly, I've told them why. They haven't agreed, but I've made clear where the line is drawn and the reasons I am enforcing it, and so they have to go along with it. However, I have not ended relationships with those people in other ways. Indeed, I try to love and enjoy them as I can, and the boundary actually helps me do that. This, in my mind, is always the goal: boundaries that promote relationship instead of terminating it.

What's more, as I've grown, I've made a point to loosen boundaries I had as a younger person where I can. Over time some hurts can heal and my capacity to handle hard things increased, and again, I want to always be pushing in the direction of love, and so I've reengaged. Sometimes successfully, and other times concluding the line still needs to stay in place.

Of course, there are certain boundaries that will probably never change. There are certain people and certain relationships where any give invites them to press in and try to do harm again. Those relationships must be grieved and abandoned. Part of this is obviously dependent on the nature of the relationship – the bar to never speak to an ex-girlfriend again is much lower than to never speak to a sibling or child – and part is dependent on what has and is being done. But we must make sure we are keeping such exceptional breeches exceptional – if they become the rule, then we have drawn a line between us and the call of the cross.

Jesus represents the defining vision of the Christian calling. God is just, and His grace does not come apart from justice. But it is His grace that is in the driver's seat. He crossed every line He should rightfully have drawn, crossed them despite our rebellion and hatred and destructive appetites and sin, and submitted Himself to our evil in order to work our salvation. We are called to be prudent and careful and just in our human relationships, but we must never lose sight of that God who models the ultimate calling of love.