Masculinity, "Protection," and that Will Smith Oscars Thing 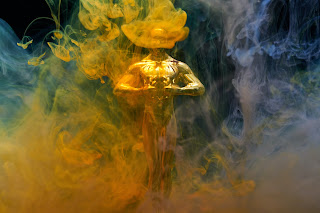 At the risk of adding more noise to the already voluminous commentary on Will Smith's now-infamous Oscars slap of Chris Rock, I've found myself thinking a lot about it the last two days. In particular, I'm interested in Smith's initial justification during his acceptance speech, explaining it as "protecting" and "defending" his family and as "love" making you "do crazy things."

I grew up in a culture, and especially a Christian culture, where "protecting" your family was a central part of what it meant to be a man, a husband, and a father. It was, along with providing, the backbone of masculinity. I think that emphasis was unhelpful, and I want to unpack why.

Upfront, let me give what should be an obvious caveat: any man should be willing to physically protect his wife or children or anyone else who is vulnerable if it were ever necessary, willingly risking his own life to keep them safe. This is a positive trait, and when we think about people doing this (for instance, firefighters going into a burning building or a father standing between an armed assailant and his family), we should treat it as praiseworthy. That said, just as shingles are a part of a house but make terrible foundations, something can be true of manhood and nonetheless be a bad starting point for defining masculinity.

First, and most basically, such physical protection really isn't a common scenario for us to confront, especially in our modern world. For most people, such situations probably won't occur once in their lives. Yes, such a responsibility might still dictate certain actions be taken in ordinary life, like walking a woman to her car at night, but these are still pretty limited, and because they are limited, they can lead to really unfair relational dynamics.

In the medieval ages, within the theory of the "three estates," nobles justified their exorbitant lifestyles by explaining that it was their job to militarily protect the peasants under their authority. What became apparent as time went on (and peasant levies became more common and effective thanks to things like the longbow) was that the nobles' stated purpose of protection didn't really justify the rights they claimed over the population's wealth, land, and bodies. They feasted and partied and debauched themselves and justified it by saying that, in the unlikely event of a war, they would be the country's protectors. It wasn't a fair trade.

I have encountered men who use basically this same logic in the modern world. They talk a lot about their role of protecting in a way that sees all of the cooking, cleaning, laundry, and childrearing of domestic life done by their spouse as a fair tradeoff for the supposed safety they provide. Which it simply isn't. If the primary purpose of men is to fight off bandits and go to war, well, then manhood is not an especially relevant calling in our world.

The second issue with focusing on protecting as a primary masculine purpose is that it very easily confuses physically protecting others with selfishly protecting one's own pride. While I am not able to peer into any human heart, I suspect something like that was in play for Will Smith, at least in part. It would be for me. Chris Rock disrespected Jada, Will's wife. Thanks to the endlessly transitive property of honor, that meant that Christ Rock was also disrespecting Will. And so the question has to be asked: who was it that was being protected by the violence, Jada or Will? More generally, when men strut about protecting their family's honor, how much of that is really just code for defending their own egos?

I have watched exactly this dynamic play out in abusive relationships. The husband, who is himself physically hurting his wife and kids, is otherwise obsessed with "protecting" them. He is jealous of the attentions of outsiders. He is convinced that everyone else might do them harm (and is trying to convince them of this fact) while ignoring the one person who is in fact an objective, current threat to their safety. Why? Part of this is about control, of course, but part is also a manifestation of the root cause of abuse, the abuser's ego swallowing up the personhood of its victims in service to itself.

While those manifestations are extreme, all of us can fall prey to this type of thinking. Focusing on external threats is a way to shore up our internal insecurities and imperfections. Attacking perceived enemies makes us feel strong and as if we have agency, allaying our anxieties. All of this "protecting" is really the working out of pride in the system of the family. Protection easily becomes a cover-up for self-obsession.

However, my biggest issue with centering masculinity on protection is that it is unbiblical. Again, I'm not denying that a man should physically defend innocent people from harm; of course he should. However, that is not the bible's focus. You can't find a single verse calling husbands or fathers to protect their families. Providing for them has slightly more grounding, since Paul calls Christians (and especially children and grandchildren of widows) to "provide for their relatives, and especially for their own household" (1 Timothy 5:8), but this still doesn't seem to be at the center of things.

The Christian vision for masculinity centers on loving service. That is always the calling of Scripture when it addresses husbands and fathers (Ephesians 5:25-33, 6:4, Colossians 3:19, 21 1 Peter 3:7). More than that, it is the calling of Jesus at its core: that the Son of Man came not to be served but to serve and to give himself up as a ransom for many (Matthew 20:26-28, cf. Matthew 23:11-12, John 13:12-14, Mark 10:44-45, etc.) If something other than this self-sacrificing, others-blessing love is what we put at the heart of being a man, we will always turn men into corrupted facsimiles rather than God's good design.

Sometimes, when I say this to men, they wrestle with it because they ask, "Well, isn't a woman's calling also to loving service?" The answer is of course yes; Christ's example of love applies to all of us. But that betrays a deeper issue. Being a man is not the opposite of being a woman; they are complements, two halves of the image of God, and so there should naturally be a great deal they share in common as well as ways they differ. Men who are seeking to serve others using all the capacities God gave them will naturally be masculine men in a proper, God-honoring sense, and women seeking to serve others using all the capacities God gave them will likewise be feminine. By definition, regardless of how they might fit with cultural trappings. That commitment will work itself out differently in some areas, because men and women are not interchangeable, and similarly in others. But our focus should not be on accentuating or obsessing over the differences; it should be on pursuing Christlike love.

And within this framework, questions about protecting others find their natural place. If I am serving my wife, I will of course stand up for her when it is appropriate and she will appreciate it and I would definitely seek to physically protect her if that were ever necessary, but not because that's the heart of "what it means to be a man." I would do that because, in 99 other ways, I've been seeking to live my life in a manner that gives up myself to serve her, and this is simply one more way to do it. Protecting others is a good thing to do. We just need to keep it in its proper place, lest we neglect the 99 more important callings in celebration of the one.