A Stroll in New Jerusalem 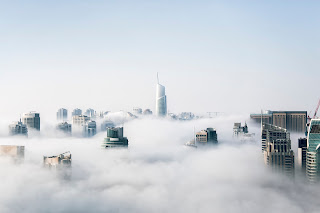 “And they sang a new song, saying, "Worthy are you to take the scroll and to open its seals, for you were slain, and by your blood you ransomed people for God from every tribe and language and people and nation, and you have made them a kingdom and priests to our God, and they shall reign on the earth.” (Revelation 5:9-10)

Engage with me, if you would, in an imaginative journey.

Picture the heavenly city. That is the image Scripture uses of the end of the story – a great city, a New Jerusalem, descending to the earth. It is a city whose dimensions are as big as the whole world, a city where God is finally present with humanity and where the nations are gathered into God's new humanity. It is of course not a literal planet-sized city, but it does communicate the image of the new creation which Scripture imagines as our destiny.

What does the architecture of that city look like? Our instincts, I think, are to grasp for some single earthly example. Washington D.C. perhaps, or the Vatican. But remember, this is a city where all the nations have been gathered. It cannot look like any earthly city because every earthly city is but one thread, one sliver of human beauty. So imagine it as a city with all the grandest and best of all the earth's cities combined. Here is a dome; there, a minaret. Pillared porticos. Glass towers. Tight alleys full of signs where people laugh and dine and share together. Here is a building resembling an earth-hewn Ethiopian church; over there is a gothic archway. Every expression of structural design in all its diversity combining and colliding and joined as one.

What do the people look like? It would be quite the diversity crowd, a diversity we struggle to imagine. If we use just the world's demographics today, over half of the people in that heavenly city are Asian, but in all the diverse appearances found on that huge continent. 15% are white, another 15% are black, 10% are Latino and 10% are middle-eastern. But even that, of course, is misleading because those appearances have grown and changed over the centuries. (If those figures aren't how you picture the heavenly population, it is worth noting that they are far closer to the current makeup of the church than some of us realize, as I noted at the end of this video.)

And never mind just physical appearance – how are they dressed? How are they accessorized? When the Bible pictures the saints in glory it clothes them in robes because that is the cultural context of its first readers, but we can only assume that the nations bring in all their varied styles and colors. Here is a suit, there a kimono, and between them a dashiki and a turbanned robe. The most metropolitan of modern cities cannot begin to approach the fusion of style and culture that will explode visibly onto New Jerusalem's streets.

What languages do you hear? There is some theological debate about language in the restored creation since the confusion of languages seems the result of human sin. There are thus two options, but neither is what we imagine. Either we will speak some perfect language that takes a measure of its perfection from every earthly tongue or we will continue in our linguistic diversity and simply have the time and patience and selflessness to seek to understand each other. The book of Revelation pictures people of every tongue as present in heaven, and one way or another, they will be bringing the glory of their particular language to sing praises to the Lord.

And speaking of praises – think of the music! The sorts of praise we are attached to in 21st-century America will certainly be there, whether organs and choirs or guitars and tambourines. Yet how impoverished that dichotomy is! There will be djembes and banjos and dulcimers and sitars joining in praise. Every scale and mode and tonality of the earth. Hip-hop and throat singing and Gregorian chant.

We could go on, of course. The varied smells. The varied dishes. The hundred nuanced senses of humor. The insights offered from every culture – a place where American individualism and Chinese traditionalism and African ancestral values and Arab zeal and honor can all sit down and learn from each other, recognizing how pitifully incomplete their broken piece of the picture was to full life in God's true world.

Sit for a moment in that picture of the heavenly city. Walk around its streets a little while. Look around. Then tell me – how does that change the way we experience the world? Because I think it changes it a lot.

Theologians have noted that eschatology – the study of the end times, of the age to come – matters not because it lets us read newspapers and feel worried about tomorrow but because it shapes how we live in the world today. Our image of the future shapes how we live in the present. That is true in all sorts of ways, but I am convinced one of them is in how we regard the diversity of our world.

We all tend to picture the heavenly city as our specific earthly one, idealized. That is natural, but it is also destructive. It takes our culture and priorities and preferences and enshrines them in streets of gold. It leads us into thinking that glory requires some victory or vindication of our culture over against others. A city as Scripture pictures it, though – the ingathering of the nations, the joining of every culture and ethnicity and history and system of values – that cuts off our triumphalism at its knees.

I hear people bicker about their preferred style of worshipping God and I sometimes think, “Man, come glory, you're really going to be disappointed.”

I see people bristle at someone's struggle with a foreign tongue and imagine how we will all stutter, either as we all learn some unfamiliar heavenly tongue or as we're in between our classes on Mandarin and Farsi and wish we had the mind and fortitude to master more languages in this life rather than save them all for the next.

I notice myself get so attached to certain ways of thinking, certain systems of values that aren't a product of God's word but simply accidents of geography and history. I can only imagine the humility I will taste when the Father sits me down and points out how wrong I am and then sends me to sit with the children of India and New Guinnea to learn the insights they offer.

That is the city we are headed for. We are all refugees waiting for that home, and it would perhaps be wise in the light of that coming city to be a little less in love with our particular worldly habitation. There is good here in my place. It will bring its fruit before the throne as sure as any other. But it is a tiny, imperfect sliver of the good that is to come.
Labels: Eternity Race