Dogs at the Table 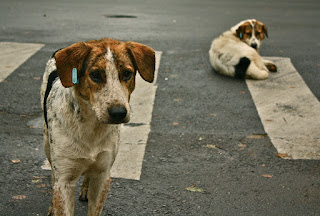 And behold, a Canaanite woman from that region came out and was crying, “Have mercy on me, O Lord, Son of David; my daughter is severely oppressed by a demon.” But he did not answer her a word. And his disciples came and begged him, saying, “Send her away, for she is crying out after us.” He answered, “I was sent only to the lost sheep of the house of Israel.” But she came and knelt before him, saying, “Lord, help me.” And he answered, “It is not right to take the children's bread and throw it to the dogs.” She said, “Yes, Lord, yet even the dogs eat the crumbs that fall from their masters' table.” Then Jesus answered her, “O woman, great is your faith! Be it done for you as you desire.” And her daughter was healed instantly. (Matthew 15:22-28)

This is one of the most uncomfortable stories in the gospels. It seems, when we encounter it, to cut against everything we imagine Jesus stands for. It seems like racism, like the verbal beating of an already-hurting woman. How do we square this with the inclusion and love Jesus elsewhere seems to stand for?

There are those who take this story at face value. I have heard it viewed, by those of a certain theological persuasion, as a tale about how even Jesus had to learn tolerance. As though this woman represented a teachable moment for the Annoined One. Which might sound fine, as long as you aren't invested (like the gospel writers seem to be) in Jesus being the perfect Son of God. But even then, this story doesn't do what such readers want. They desire it to be an illustration for how we should all grow in rejecting discrimination. Yet what seemingly impresses Jesus in this telling of the story is this woman's willingness to buy into the system, her acceptance of the discrimination leveled against her. Which is not the message of reconciliation and dignity we desire.

Others treat this as a tale of tragic theological necessity. They want to maintain the orthodox view of Jesus as sinless, so they seize on his statement that "I was sent only to the lost sheep of the house of Israel" as an explanation. He would help her if he could, but that wasn't God's plan. The Gentiles are gathered in only after the cross and resurrection, and so while the woman's request is good, her timing is off. Yet this is hardly a better reading. It makes God's mercy tied to Israelite ethnicity in a way Scripture doesn't elsewhere hold - the noble Gentile, especially the noble Gentile woman, is a feature through the Old Testament, found in women like Rahab and Ruth. It doesn't explain the other times when Jesus freely seems to heal Gentiles or their children (i.e. Luke 7:1-10). Worst of all, it doesn't explain why Jesus ultimately heals this woman. If it was a fatalistic curse of divine timing that causes this exchange, a little faith hardly changes such circumstances.

As is often the case, the better reading rests in paying attention to the context around this exchange.

Both Matthew and Mark place this story directly after an interchange with the Pharisees about religious rituals surrounding food. They demand to know why the disciples don't follow their religious rules and Jesus responds by challenging their whole conception of how righeousness works. They view it as being about outward righteousness, about what a person does externally. It is about what you eat and how you eat it. Jesus replies that it is not what enters a person that makes them unclean but what exits them. "For out of the heart come evil thoughts, murder, adultery, sexual immorality, theft, false witness, slander. These are what defile a person. But to eat with unwashed hands does not defile anyone." (Matthew 15:19-20)

Lest you doubt the connection between that story and this one, an additional detail is helpful. When the Pharisees bring their complaint, in both cases it is about bread. This is (strangely) a detail the English translations mostly miss in how they render the Greek, but the word for bread is present in both Matthew 15:2 and Mark 7:5 - the Pharisees literally ask, "Why don't the disciples wash their hands when they eat bread?"

So it is noteworthy that Jesus starts to talk about bread in His dialog with this woman. "It is not right to take the children's bread and throw it to the dogs." (Matthew 15:26) He is still on the same topic, only now He is talking about it with this religious outsider. We have heard the Pharisees' view of bread - what is yours?

Of course, Jesus frames it in the starkest possible language. I don't think that's a sign of how he views the woman, though. Rather, it is a statement of how the world around her views her. Dogs in ancient Israel were not seen as loving pets but as feral hunters. Indeed, their eating habits are often commented upon in a way that, to a people very invested in regulations about food, marks them as unclean (i.e. Exodus 22:31, 1 Kings 21:23-24, Proverbs 26:11). Comparing them with Gentiles was a common pastime of the religious elite.

This sets their final interchange in a striking light. The Pharisees, if called dogs, would have been apoplectic. They would have stomped about in a quivering rage. This woman is without pretense. Her response is to own this lowly place the world puts her in and simply to ask for mercy. "After all, even the dogs eat the leftover scraps from the table."

Again, the way I sometimes hear this story interpreted is that Jesus is impressed by her cleverness. "What an unexpected rejoinder," he thinks, and this somehow results in her daughter's healing. Yet it is not her cleverness but her humbleness which seems to me to be the point of the story. She isn't worried about her place in the world; she is simply invested in loving her child and trusting this apparent Savior.

This story is a rebuke to the Pharisees and their way of viewing things that functions on two levels. First, it exposes the problem in their hearts. They have clean hands but corrupted hearts; this Canaanite woman is dirty on the outside but shows a deep well of character within. So it stands with much of Jesus's teachings as a challenge to a religion that is more interested in the externals than with true virtue.

Even on this level the church often fails to live out this idea. Christians can still be obsessed with the external. I minister in a Midwestern setting where, for many, Christianity consists mostly of outward religious observance. It is about where you go on Sunday morning and how you dress while you go there. It is about bumper stickers and avoiding certain obvious vices and using particular vocabulary to talk about the world. When given a choice between true virtue and appearing outwardly righteous, we often work to keep up appearances. This woman's attitude, and Jesus's commendation of her, stand as a rebuke to that.

At a deeper level, though, this story invites us to ask who we identify with. The gospels don't just hold up this woman as an illustrative point of moral curiosity. They hold her up as an invitation to true humility.

Framed as it is by the Pharisees' hypocrisy and the disciples' befuddlement, this story is meant to remind us that we are to share the Canaanite woman's view of ourselves. We are not pious priests sitting down to dine at the table; we are dogs begging for the scraps.

True faith requires true humility. It requires us to own the fact that we are broken. Our problem with self-righteousness is always at root a problem of self-delusion. We are not truly righteous. No one can read that list of vices Jesus gives, including as it does evil thoughts and slander alongside things like adultery and murder, and come away unworried. We are all, in our hearts, defiled. The ultimate challenge is not to morally reform our hearts rather than just our appearances, although that is present. The ultimate challenge is to own the immorality of our hearts and then to come to Jesus, asking for His mercy.

The posture of the Canaanite woman is the posture of the disciple. To say, "I am the lowliest. I am the unclean. I am the dog in this story. My only hope is to come as one needing grace." This is the position this woman freely takes, and it is the posture within which grace comes. She receives the healing she asks for. She receives dignity and praise in the eyes of the disciples. Yet the only way she receives it - the only way any of us receive it - is to have spirits broken and humble enough to own our need.
Labels: Grace