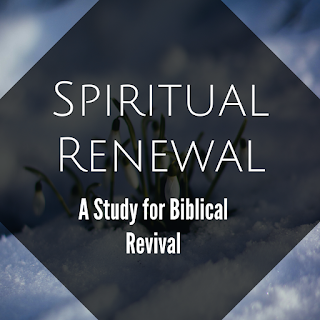 This is the first lesson of a three-week study we are inviting our church to work through on "spiritual renewal" - more on that below. We're asking people to read and ponder the text, consider the lesson and join us in the prayer. I'll be posting the daily studies here as well as circulating them as a formatted devotional guide. Feel free to contact me if you'd like the formatted PDF version.

Lesson: I grew up in a church setting that made much of “revival.” We would continually pray for it. We would have semi-annual meetings where an outside speaker would give fiery sermons and fill the altar with weeping, penitent sinners. We lived in a constant sense that God was about to do something big, that a third great awakening was just around the corner.

As I grew older, I became more and more jaded about such revivalism. Mainly because not much seemed to change. The people who came forward were almost entirely the same people, year after year, and they were the ones who were already seeking to live out their faiths. Evangelists padded their numbers with folks getting “saved” for the tenth time. By the time I struck out on my own in the faith, I figured I was done with the idea of revival.

And yet, while the abuses of my youth were real, revival itself is a biblical category. Scripture is full of prayers to “revive,” to “restore,” and to “renew.” Psalm 80 is an example of such a prayer. Israel is remembering seasons of spiritual life and divine blessing. They recognize the impoverished realities of their own lives next to such seasons. So they pray over and over, “Restore us, O Lord God of hosts! Let your face shine, that we may be saved!”

Certainly, many Christians in the West feel this dissatisfaction with the present state of the church. While Christianity grows and thrives across Africa, South America and Asia, we feel like our times of life and spiritual experience are over. We need to be revived, restored and renewed.

In the lessons that follow, we’re going to be exploring what Scripture says about such times of spiritual renewal. Some of this will involve correcting certain misconceptions. However, more than that, we will hopefully be showing you a path for the church to pursue such renewal and experience restored spiritual life.

Prayer: Holy Father, we as Your people are far from where we should be. We are compromised with idols, complicit in our world’s sins, neglectful of the means of grace and doubtful of Your promises. As a result, we are harried on many sides, often fearful and in retreat. Restore us, O Lord God of hosts! Let Your face shine, that we may be saved! Have regard for Your people, give us life and make us strong. All of this we pray in the name of Jesus Christ, our Lord. AMEN

A Note on Terminology: In the lessons that follow, “spiritual renewal” will be the language I use to describe God’s restoring and reviving work. Properly understood, this is the same thing as talking about “revival.” However, since that word is loaded with so many misconceptions and different ideas, renewal will hopefully offer a more neutral way to have the discussion. Note that I’m directly borrowing this language from Christian writers like Richard Lovelace and Tim Keller.