The Resurrection of the Body 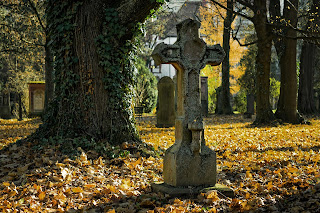 “I believe... in the resurrection of the body and the life everlasting.”

I regularly perform funerals. It goes with the territory of being a pastor. I did one just last week. In every funeral sermon I end up aiming to do two things. One is to honor the person's life, to acknowledge the goodness and beauty that has been lost and, alongside that, the grief of those missing them. The other is to proclaim the hope of the resurrection. To speak to the reality that, if we are in Christ, we will be raised again from the dead. In doing that second work, I am often struck by how alien that hope is to many Christians who hear it. They seem puzzled by the very hope the creed confesses.

Here is the story we seem to believe. We are alive right now, but we will die. When we die, we go to heaven. We are absent from the body but at home with the Lord. Heaven is a place of peace, we believe, and a place of rest. And it is the place where we will dwell forever.

Everything I just said there, everything about that story is correct. It is what the Bible teaches... until we get to the last sentence. That sentence is not true, and believing it actually makes us miss the truth and the hope of what Jesus has done.

First, it makes us miss the truth of Christ's work. Take, for example, Paul's discussion of the resurrection in 1 Corinthians 15. This whole chapter lends the lie to that idea, but take just this one point: “For as by a man came death, by a man has come also the resurrection of the dead. For as in Adam all die, so also in Christ shall all be made alive. But each in his own order: Christ the firstfruits, then at his coming those who belong to Christ.” (1 Corinthians 15:19-21) Christ was resurrected as the firstfruits, Paul says. Notice that this isn't a spiritual resurrection – Jesus comes flesh and blood from His tomb, glorified but still very much with a human body. And just as Christ was raise, “at his coming those who belong to Christ” will be made alive as well.

Of course, there is something different about that resurrected body. This is perhaps why some are confused. Paul describes it as “spiritual,” but by that he doesn't mean “non-physical.” Indeed, he describes Jesus as having such a spiritual body, yet the disciples eat and drink with Him and Thomas feels the holes in His hand and the gash in His side. The resurrection body is spiritual in the sense of “full of the Spirit.” The life and the wholeness of God so infuses resurrection bodies that they become something more - not less - than our current flesh. The are bodies more human – more truly alive – that these frail vessels we are in at present, marred and broken by the fall.

C.S. Lewis, when he pictures the world to come in The Great Divorce, views it as more real than the world we currently inhabit. In His imagining our bodies are more solid than they are now. This is picking up on Paul's language: “Behold! I tell you a mystery. We shall not all sleep, but we shall all be changed, in a moment, in the twinkling of an eye, at the last trumpet. For the trumpet will sound, and the dead will be raised imperishable, and we shall be changed. For this perishable body must put on the imperishable, and this mortal body must put on immortality.” (1 Corinthians 15:51-53) Our physical bodies are not made immaterial at the resurrection. They are made imperishable. Indestructible. Immortal.

That is the hope of Scripture. That when we die, our lives are hidden with God until Christ's coming. That is a beautiful truth, but it is not the end of the story. Instead, when Jesus comes back to this earth, we will be raised anew. We will be human beings with human bodies, bodies so real and full of life that we now seem to be but pale shadows of their solid glory.

In the folk religion that many people confuse with Christianity, death looks an awful lot like the winner. Sure, our souls get to flit off to some soulish realm where they recline on clouds and bask in sunrays. I suppose that is a sort of comfort. In terms of this world though, in terms of our bodies, death wins. It has the final say. God created us with bodies, sin warps and destroys them, and God evacuates our souls in some cosmic Dunkirk so at least something survives.

In biblical Christianity, death is defeated. It strikes us each a mortal blow, just as it struck Jesus. Just as Jesus Christ rose again, though – just as death saw it's greatest victim torn from its jaws to rise once more – so too will we. A powerful and glorious hope is found in that reality. It is the reason Paul can end the chapter, not by sighing in relief that death doesn't fully triumph but rather declaring it's full defeat. “O death, where is your victory? O death, where is your sting?... Thanks be to God, who gives us the victory through our Lord Jesus Christ.” (1 Corinthians 15:55, 57)

This is the hope we have in the Christ. That we walk this earth and laugh and eat and play and love. That death strikes us all, and there is loss and pain at it's blow. But that Jesus has struck death itself a fatal blow, and that after our deaths comes a new day. After death comes life, and we will walk this earth again, and laugh and eat and play and love again. We will live again on an earth made new, with true bodies on a true world that makes this one seem only a ghost in comparison. We believe in the resurrection of the body, and the life everlasting.