Whoever Is Not Against Us 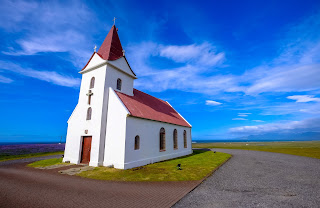 “Teacher,” said John, “we saw someone driving out demons in your name and we told him to stop, because he was not one of us.”

“Do not stop him,” Jesus said. “For no one who does a miracle in my name can in the next moment say anything bad about me, for whoever is not against us is for us. Truly I tell you, anyone who gives you a cup of water in my name because you belong to the Messiah will certainly not lose their reward. (Mark 9:38-41)

I grew up in a Christian fundamentalism that was very interested with defining the boundaries of "true" Christianity. This is not inherently wrong - the Bible does warn often against false teachers and call the church to be on their guard against them (Jeremiah 23:16, Matthew 24:24, Acts 20:28-30, 2 Timothy 4:3-4 and many more). Yet that impulse, as I experienced it, was exacting and narrow. Believers exactly like us, they were alright. You could quibble with a few details and still be okay, maybe. Any significant deviation in doctrine or practice, though, was seen as wandering onto the paths to hell.

Christians have long defined themselves over against each other. Debates from the early church onward have split the church into separate institutions, and even within those institutions, there were factions with different emphases. All of which is troubling because, as much as we are warned against false teachers, we are also called repeatedly to unity in the church (John 17:22-23, 1 Corinthians 1:10, Ephesians 4:11-13 and, again, many more).

This has only become more challenging in the internet age. One of the features of modern discourse is its divisiveness, and this has crept into the church too. Online debates rage in little corners of the internet, with blog posts and tweet storms making much hay out of obscure theological fields. News stories and web sites are devoted to attacking and defending various celebrity pastors or denominations. Indeed, there is a sense in which controversy inherently drives the internet. The need to have something to write about, something to tweet about, means that we are often on the hunt for the latest debate which we can bend to our rhetorical ends.

Again, plenty of this comes from good impulses. Modern communication has blessed us with the ability to hold accountable those who might otherwise behave as if they are above God's law. There are situations of abuse or wrong teaching which have been brought into the light by such work, and this is good for the body. More than that, it is often a longing to pursue the truth that drives these debates. Those on both sides perceive value in what they believe and the dangers of getting it wrong. Because God's word is not just abstract ideas but truth with legs, any error does cause damage in the church.

That said, it is crucial for us to engage in such debate with care. One constant warning of Scripture is against divisiveness (Romans 16:17, James 4:1). Paul views divisiveness as a grounds for excommunication from the church. "But avoid foolish controversies, genealogies, dissensions, and quarrels about the law, for they are unprofitable and worthless. As for a person who stirs up division, after warning him once and then twice, have nothing more to do with him, knowing that such a person is warped and sinful; he is self-condemned." (Titus 3:9-11) These are not warning we should take lightly.

So how do we determine the difference? I found myself recently reflecting on this story from Mark's gospel, and particularly on one phrase: "Whoever is not against us is for us."

This is the opposite of the world's attitude. "Whoever is not for us..." is the rallying cry of revolutionaries. It is a call to draw up battle lines against not only our enemies but also those not actively standing as our allies. Yet this is not what Jesus counsels. When John encounters a man seeking to do Christ's work, even though he is doing it apart from the ideal structure of being one of Jesus's followers, Christ counsels not discipline but delight. It should be a beauty when we discover someone else doing the Lord's work, even though the form it takes is not what we might desire.

The apostle Paul shows a similar attitude. Writing from prison, he acknowledges that there are those preaching Christ out of love for him and the church and those who seem to be doing it to stir up trouble. Yet his response is not to counsel rebuke but rather rejoicing. "What then? Only that in every way, whether in pretense or in truth, Christ is proclaimed, and in that I rejoice." (Philippians 1:18) These evangelists are in a sense against Paul. But they are still doing the work of Christ, however wrongheadedly, and so Paul expresses gladness for the sake of the kingdom. They are not against Christ, and so they are in fact for Him.

Coming out of that, let me offer a few thoughts. First, it is not the case that this supersedes warnings against false teaching. Those still apply, and Christians are called to be on their guard. However, it should make us very cautious about who we paint with that brush.

In the circles of Christianity where I move, the idea is often stated that we shouldn't divide over non-essentials but only over gospel issues. This seems like a helpful distinction. In practice, though, it often simply trains us to make every issue into a gospel issue. Doctrine is interconnected, and this means that there is a route - albiet a circuitous one - to making any belief look essential.

We must fight this impulse. Perhaps the best weapon for that fight rests in Jesus's framework of "against or for." Something is not a "gospel issue" simply because it expresses the gospel less perfectly than we would like. That doesn't mean it doesn't matter - in all of this, we should debate and discuss within the bond of Christ so that we might all grow to be more like Him - but it does mean that we should draw a clear distinction between those we believe are in some way distorting the gospel and those who are destroying it.

Second, we should rejoice when the work of Christ is done, even by those we personally dislike or disagree with. There are a thousand different ways we can assess someone's thinking or ministry. Our tendency is to find the one where we disagree and focus on it. Jesus, however, would counsel that we first rejoice in the faithfulness before we attack the failure.

As I serve as a pastor, there is a weight I feel about just how much the church - and I - should be doing. We should be proclaiming the truth, training people in Biblical doctrine, serving the poor, evangelizing the world, blessing our communities, raising up leaders, showing generosity and hospitality to each other, pursuing personal holiness, binding up broken hearts... and that's only the beginning of the list. I know only too well that I am not perfectly carrying out all of those tasks. Who could, in the face of a calling summed up as "being Christ to the world?"

Our tendency, especially when viewing ministries from the outside, is to focus on the failure. We see an area where it is not living up to this calling and we make that the standard by which we judge. Yet my heart trembles in those moments because, if that is the standard, who among us can stand?

As I keep saying, this doesn't mean we should never point out failures. Criticism is good and necessary for growth. Such failures should be pointed out, though, within a framework of genuine appreciation and respect. When they grow to eclipse all the ways a person or church is seeking to be faithful, we have adopted a standard of perfection none of us can meet. This will breed both a cynicism in our hearts toward the always-imperfect church and a hypocrisy as we fail to reckon with our own messy mixture of triumph and defeat.

Lastly, we should temper our criticism with the beautiful sovereignty of God. Often, an obsession with criticism is really a failure to reckon with the fact that Christ is in control. We believe that it depends on us, and so any failure seems to threaten the very mission of the church.

I suspect that stands behind John's remarks. This exorcist using Christ's name is not operating through the approved channels. He isn't traveling with Jesus and under His authority. How, John must be wondering, can we prevent such a person from teaching or doing things contrary to Jesus's will? This is not an inconsequential concern. Indeed, it would probably be better for this minister to spend time as a disciple. Yet Jesus doesn't seem as worried as John. Here, I suspect, is why.

When Simon professes Jesus as the Messiah, Jesus renames him Peter, which means "rock." In this profound moment for the disciple, Jesus then blesses him and says, "And I tell you, you are Peter, and on this rock I will build my church, and the gates of hell shall not prevail against it." (Matthew 16:18)

Jesus declares Peter to be a rock, and yet it is not because Peter is particularly strong or consistent. Quite the opposite - he is something of a case study in failure. This Rock will fall asleep in the garden, deny Jesus at his trial, and struggle to overcome his racism in a way that forces Paul to publicly call him out. Yet Jesus declares that a church built on one such as Peter will ultimately be triumphant. Even the gates of hell will not be able to stand against it's onslaught.

The reason rests in the middle phrase of that blessing - "I will build my church." Peter is not the one growing and spreading the kingdom. That is a work of God. Peter is simply an imperfect instrument through which it will be built.

We are all imperfect instruments. We are broken drums and guitars with warped necks. God, though, is the master musician, and He will perform His song of salvation despite our broken strings. He is doing His perfect work through us, His imperfect people. This should temper all of our criticism, teaching us to stand not on our perfection but on God's power. He is building His church, and all those who aren't against it are being used to build it, imperfect as each of us may be.
Labels: Church