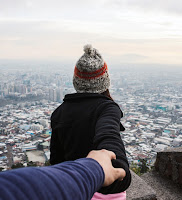 (A few weeks ago, I wrote this letter to our sons, trying to say some things about masculinity and manhood. I was told that I should try the same thing for our daughter. I'm a bit trepidatious about it - being male, I recognize there is less I understand about her world than with our boys. That said, here's a dad's best shot.)


My daughter,
This world is full of lies. They are aimed at all of us, but perhaps at little girls most of all. Growing from a girl into a woman, like growing from a boy into a man, rests on recognizing those lies and claiming the truth instead.

Value is always something given by God. You don't need a boy or friends or society to recognize it; you were made in His image. You are a child of the Creator, a regent set just below Him and over His world. Your job is not to seek value – you have it. Which means they cannot give it to you and they cannot take it away.

Your job instead is to add your value to the world. Just as God lavishes His affection and delight on us, so we are called to lavish it on others. Just as He gives us worth, so we are to seek to do things that are worthwhile. In the quest to feel valuable some girls chase after trifles. A woman instead pours out the value God has given her in love and good deeds. These are adornments of true worth.

There are two lies the world will tell you about beauty. One is that you aren't beautiful. The other is that you owe it your beauty. These both come from same underlying lie – that beauty is a thing to be possessed.

True beauty is a wild thing. The Lord hid it among the trees and hills. It is a fawn's mottled back arching with its first steps. It is the stars that shine even when the sun is in the sky, diamonds arrayed for no eye to view. It is the lilies on the hills that bloom for their Creator, even when no one is passing by.


There are two lies the world will tell you about strength. One is that, because you are a woman, you are weak. The other is that you can be strong, but you must be less of a woman to do it. These both come from the same underlying lie – that all strength is a distorted masculine strength, a strength that conquers and destroys.

The Psalmist prays, “[may] our daughters [be] like corner pillars cut for the structure of a palace.” (Psalm 144:12). This is an image of great strength – these are the posts that hold the weight of a massive building. Yet is is not a strength that destroys but one that supports. It doesn't subdue; it shelters. It doesn't take life; it gives it. This has always been the strength of women, and while the world of boys mocks it for weakness, it is mightier than all their posturing and power plays.

There are a hundred lies that boys will tell you, chasing your love. Don't believe them. They will seek to use you, and your temptation will to let them, because to be used seems better than to feel useless. Yet you are neither a tool nor a toy but a woman. A true man will honor your God-given greatness, not use you as a prop for his own ego. A true man will give himself up rather than seeking to take as much as he can. A true man will make you more – a boy will seek to make you less. Have no truck with boys; men are for women.

There are a hundred lies the world will tell you about what you cannot do, and a hundred lies about what you must. Be suspicious of those who seek to put you in bondage and of those who offer you freedom. True bondage lies in having any Lord besides Jehovah. True freedom rests in loving Him and loving His world. If you are doing those things, you are walking in His will.

My precious girl, I think about these lies and I know you won't escape them. Not fully, not without learning the hard way, and not without many tears and scars. The Devil dresses himself up as an angel of light. You will meet him in some wanting to be friends and lovers.

Through it all, know that I love you. I cannot hide you from the world's liars, but I will always be there to hold you when they have hurt you, to buy you some ice cream, and – being male – to futilely threaten to murder them all.

More than that, though, know that your identity doesn't rest in this world. True maturity is knowing and believing in the person God made you to be, even when the world insist you are someone else. True love is knowing that God gave Himself up for us, His bride. True womanhood, therefore, is to stand with the humble assurance of who you are in Him. When the world tries to lie to you, a woman meets it with the knowing smile of true wisdom and the steel spine of gospel confidence.

Before such a woman, the world is powerless and dead things will begin to come alive.